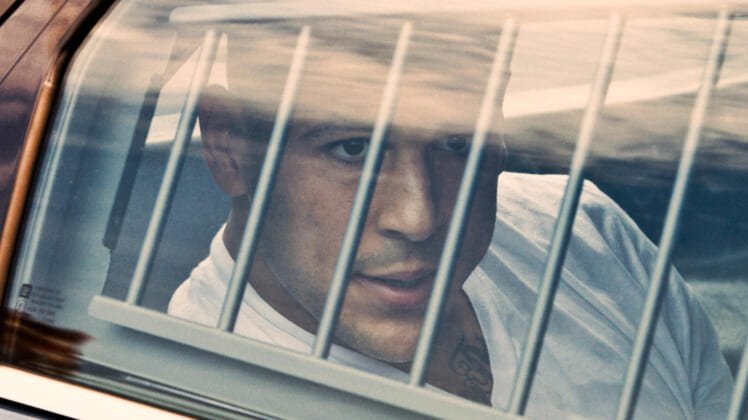 Killer Inside: The Mind of Aaron Hernandez is a Netflix documentary that draws a complicated portrait of the late NFL star. It’s a somewhat compelling series, but it feels problematic in a variety of ways.

The story covers Hernandez’s childhood and football career at the University of Florida and with the New England Patriots. Red flags abound in his backstory, yet his talent and production on the gridiron allowed him to maintain a disturbing double life, culminating in multiple murders and his own suicide.

Let’s break down Netflix’s Killer Inside in more detail. This will contain spoilers for the docuseries.

One way the three-episode narrative tries to generate empathy for Hernandez is through his extensive injury issues, as he was diagnosed with the degenerative brain disease CTE after his death. That’s really not at the forefront until the last 10 minutes of the series. A larger focus is placed on how he grew up.

His father, Dennis, was a running back at Bristol High School and respected in the community. However, it’s revealed in the first episode he had a violent streak, and once slammed his wife’s head into a sink until she was unconscious.

Dennis died during routine hernia surgery, which crushed Hernandez, as he was close to his father, despite his domestic abuse. Thereafter, his mother began a relationship with his older cousin’s husband, who then moved into the Hernandez family home.

The father of Hernandez’s high school quarterback is interviewed throughout, and really drives home how this development rocked the teenager’s world. It led him to stay with his cousin, Tanya Singleton, who became a motherly figure to him.

Upon living with his cousin, Hernandez befriended Ernest Wallace and Carlos Ortiz, who would later be his accomplices in the 2013 murder of Odin Lloyd.

A dubious handling of the sexuality subplot

Hernandez’s quarterback at Bristol, Dennis SanSoucie, describes how the two had a sexual relationship, and much of the docuseries hones in on how Hernandez repressed his homosexuality. But it’s all so speculative. A former gay Patriots player, Ryan O’Callaghan offers his opinions to support that thesis, but it all felt a little cheap.

SanSoucie details how Bristol High frowned upon kids who came out of the closet, himself included. Of course, the macho, hyper-masculine nature of football can be perceived a good “cover,” and it was for O’Callaghan.

Nevertheless, again, it all feels speculative. Who’s to say either way? It’s a little too inferred that Hernandez’s homosexuality compounded all the issues in his life, rather than a fact that’s really understood by anyone from his life.

That is, until third and final episode finally sheds more light on the issue. It features a clip of his brother, DJ, talking about how Hernandez was sexually abused as a child. That abuse, Hernandez believed, made him confused about his sexuality, and led to his anger problems.

Withholding that extremely vital information until the finale takes one aback for two reasons. One, all the homosexuality speculation in the prior episodes, especially the first, doesn’t feel connected to anything. Two, it feels like a manipulation of information just to have some clever reveal or payoff.

It’s somewhat similar to how the CTE thread of the story is handled, and how Hernandez’s frontal lobe — which informs decision-making — was damaged in a way doctors hadn’t seen before in such a young man. The CTE coverage at least makes more sense, since the story proceeds through Hernandez’s life chronologically for the most part.

A fiancée in denial

Hernandez’s fiancée, Shayanna Jenkins, happened to be the sister of Lloyd’s girlfriend. Jenkins’ loyalty to Hernandez is a big point of emphasis. One story beat implies she aided in disposing evidence The jury didn’t see her as a reliable witness, because she had no intention of giving up her husband-to-be.

This all in spite of the fact that Hernandez was implicated in a separate murder case while the Lloyd trial played out. Another indictment for a 2012 double homicide, though Hernandez was ultimately acquitted in 2017.

A lot of audio comes from phone conversations between Shayanna Jenkins and Hernandez while he’s in prison. She passes up a close relationship with her sister and sides with her fiancee instead. They also have a daughter together, which definitely complicates things.

Whatever was happening in their relationship, based on what’s depicted in Killer Inside, it was clear to anyone who knew Hernandez at all closely he was running with the wrong crowds, engaging in illegal activities, doing drugs often, drinking heavily and was prone to episodes of anger and violent behavior.

Additionally, Jenkins sticks with Hernandez even after his conviction.

Overall, this docuseries holds a viewer’s attention rather well — at least for the first episode and a half. The story is ultimately tragic for everyone involved.

It’s understandable to try to draw a sympathetic portrait of someone in light of CTE and being a victim of a variety of domestic abuses, both personally and as a witness. Between the physical and emotional trauma, Hernandez was obviously dealing with a lot. It didn’t help that his surrogate mother raised him around unsavory influences.

All that said, between the sexuality storyline’s handling and the numerous, horrific acts Hernandez committed, Killer Inside almost feels like it’s reaching at times to side with Hernandez. It feels manipulative at times, and it’s unnecessary.

Perhaps the most jarring part stems from SanSoucie’s father, as touched on before, talking up the super close relationship between Aaron and Dennis Hernandez.

Sure, the former’s mother’s affair with a family member was hard on him. Yet, it also overlooks how disturbing it is that Hernandez was seen as so close to a vicious, alcoholic, abusive father. That sounds more like a traumatic father-son bond. SanSoucie’s father never addresses this further.

In any event, Hernandez’s life was tumultuous, duplicitous and unnerving. If you love true crime stories, maybe Netflix’s Killer Inside is more for you. It gets a “Chill” from me — and while the substance is there, the execution is, well, the headline says it: problematic.

This article first appeared on SNIPdaily and was syndicated with permission.