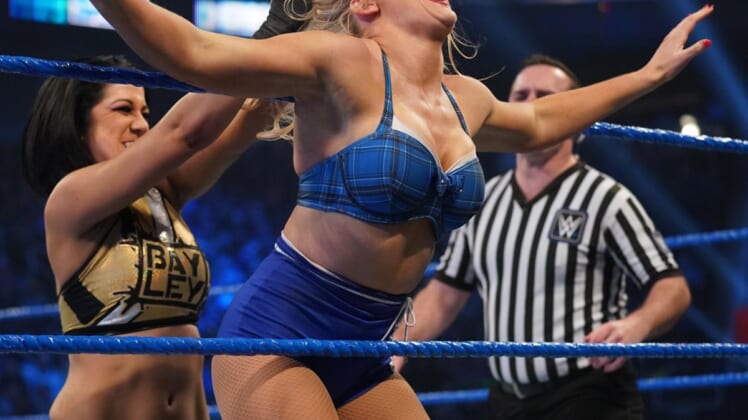 The final show before the Royal Rumble is almost here. WWE Friday Night Smackdown in Dallas, Texas kicks off as usual on FOX this Friday at 8pm EST/7pm CST.

The seeds have been planted for some compelling storylines on the blue brand heading into the Royal Rumble and ultimately WrestleMania 36. Smackdown has been a shining star the last few weeks to build up some intrigue for the first major WWE show of 2020.

Kane is rumored to take on The Fiend at the next Saudi Arabia show in February and this will set up Bray Wyatt’s WrestleMania 36 match against the legendary Undertaker. This is going to be a fun WrestleMania match for Bray Wyatt and will cement him as a future legend if he can defeat Daniel Bryan, Kane, and The Undertaker to kick off 2020.

While Kane played a big part of this week’s show, Daniel Bryan continued his quest to destroy his rival The Fiend. WWE announced we will see a Strap Match at the Royal Rumble between Daniel Bryan and The Fiend. A Strap Match is a strange stipulation to this match.  Why not something people enjoy like a Steel Cage Match?

The New Day will drop the Tag Team Championships soon

The Miz and John Morrison have defeated both New Day members two weeks in a row. These four competitors are victims of a lack of creative plans and total misuse of their talents.  At least the Tag Team Championship will get some air time on Smackdown and PPV cards in the coming weeks right?

The Revival need a change of scenery soon

Name a tag team in WWE that has been booked as bad as The Revival. Dash and Dawson were huge stars in NXT and have been victims of horrendous booking since their arrival on the main roster. The Revival stated after their recent loss to The Uso’s that “they would need to make a change since WWE wouldn’t change for them.” Is this change AEW in 2020?

Lacey Evans will be your new Smackdown womens champion

The Lacey Evans experiment has paid off slowly but surely. People are really getting behind the transition Evan’s has made from a heel character to the face contender she is now. Bayley has underwhelmed people once again and it’s time to give Lacey a shot as the women’s champion on the blue brand.

Braun Strowman will get his Intercontinental Championship Title shot

It’s absurd that Braun Strowman has never held a singles title in the WWE. It’s even more absurd how bad the WWE has used Shinsuke Nakamura since he left NXT a few years ago. With 2 wins over the current Intercontinental Champion, Braun will demand a title shot on the final show before the Royal Rumble. The time is now for this match to be set for the Royal Rumble.

Roman Reigns and King Corbin will finally settle this feud

“The Big Dog” got the win against a returning Robert Roode to pick the stipulation of his match against King Corbin at the Royal Rumble. We will get a Falls Count Anywhere Match between these bitter rivals and hopefully this ends the feud that seems like it has gone on forever. King Corbin will be looking for retribution this week on Smackdown and Reigns will be looking to end this rivalry. The time has come to please end this feud and allow both superstars a fresh and new feud.

Smackdown will lead the charge into this weekends Royal Rumble scheduled to take place in Houston, Texas. This is the best time of year for wrestling fans starting with the Royal Rumble kicking off WrestleMania season. The Smackdown roster has the potential to create some can’t miss moments all week long. Will they deliver? That question can answered starting this Friday at 8pm EST/7pm CST on Fox.