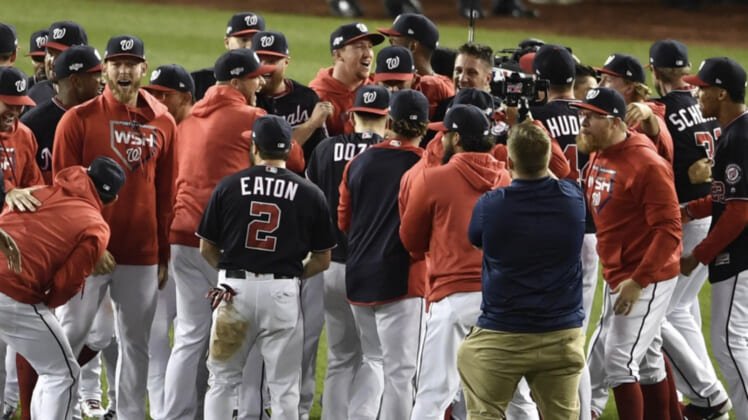 Gerrit Cole took to the mound for the Houston Astros in Game 3 of the ALCS against the Yankees in New York. As expected, the Cy Young candidate looked every bit the part

Unfortunately for the Yankees, two early homers off Luis Severino forced the team into a 2-1 series hole.

In the nation’s capital, the Washington Nationals looked to complete the series sweep and earn their first ever World Series appearance.

They started out red hot, scoring seven runs in the first inning with some help from the Cardinals.

That led to a series sweep of St. Louis and potentially a long wait for the Fall Classic.

It’s in this that we look at six things we learned from the two LCS games on Tuesday around the MLB world.

Gerrit Cole is every bit the show stopper

Cole entered Tuesday’s start having posted a 2-0 record with a 0.57 ERA and 0.57 WHIP in two playoff starts. That included him striking out 25 while walking three in 15.2 innings of work. Cole was just as good Tuesday in helping Houston take back home-field advantage against the Yankees.

The starter struck out seven and gave up zero runs in seven innings of work. He also pitched out of a jam in the fifth, thanks in large part to the fall weather in New York.

Call it some luck, but that was a huge stretch for Cole. He was able to get Didi Gregorius for the inning ending long flyout to end the rally. New York didn’t pull any closer in 4-1 Astros win. Cole has now posted an absurdly low 0.40 ERA in three playoff starts this season.

Yankees need to switch up their lineup

We’re not too sure what Yankees manager Aaron Boone was thinking heading into Game 3. He had struggling veterans Brett Gardner and Edwin Encarnacion batting third and fourth respectively, the two entered Tuesday hitting a combined 2-for-17 with 10 strikeouts in the series. Meanwhile, Gleyber Torres had put up a .400 average with five RBI in the first two games. He was batting fifth.

It didn’t go too swimmingly. New York went 0-for-6 with runners in scoring position. Encarnacion and Gardner left a combined four men on base. Meanwhile, Torres knocked in the only run of the game for New York with a homer in the eighth.

Boone now has to think long and hard about moving Torres up in the lineup. Heck, batting him third in Game 4 would make sense. As for the other two, maybe a night on the pine could do wonders.

Postseason veterans step up for the Astros

Houston was not going to have much of an issue with the ALCS being too big of a stage. Multiple members of the team’s lineup had been here before. It was another day at the park, so to speak.

That started with Jose Altuve homering off Severino to open the scoring in the first inning. It was then Josh Reddick turning back the clock with a homer to make it 2-0.

That was all Cole needed in yet another dominating performance. Will Harris and Roberto Osuna would get the final five outs of the game without yielding a base runner to end any hopes of a Yankees comeback. Big time stuff from these four veterans.

For the first time since the early 1930s, a Major League Baseball team from the nation’s capital will be playing in the Fall Classic.

What has transpired since is just simply amazing. Washington outscored St. Louis 20-8 in the four-game sweep. It heads into the World Series playing absolutely tremendous baseball. And in reality, Mr. Martinez deserves most of the credit.

St. Louis was hoping that Paul Goldschmidt and Marcell Ozuna would act as the meat against a dominant top-end of the Nationals’ rotation in the NLCS.

Not only did that fail to come to fruition, the two struggled against Patrick Corbin on Tuesday. Goldschmidt and Ozuna went a combined 0-for-6, striking out six times in their first six at-bats. That’s some absolutely disastrous stuff right there.

Heck, the two were downright horrible during the four-game sweep. Ozuna collected 3 hits in 16 at-bats while striking out eight times. Goldschmidt? Well, he posted a .063 batting average with an 56% strikeout rate. That’s obviously not going to get it done.

World Series is set up well for the Nationals

No matter how the remainder of the ALCS plays out, Max Scherzer will get the start in Game 1 of the Fall Classic followed by Stephen Strasburg. Washington made sure of that by making quick work of St. Louis in the NLCS.

What does this mean? The Nats are unlikely to have to worry about a bullpen game. Scherzer has proven he can go on short rest. With those two opening the World Series, there likely won’t be pressure to skip Anibal Sanchez or Patrick Corbin in a start.

This is no small thing for a squad that’s been relying on only a handful of pitchers since the wild card game.