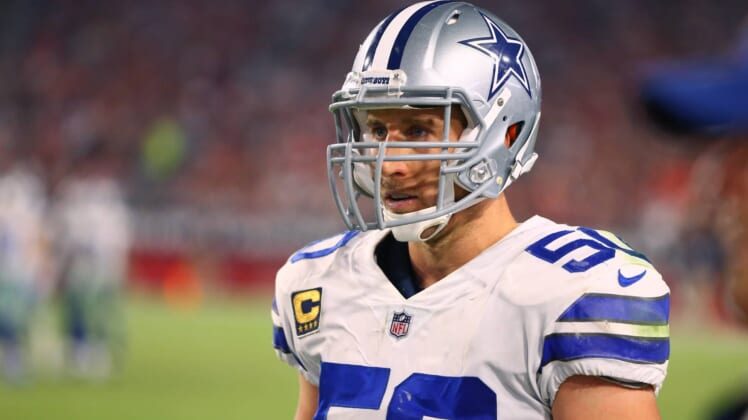 It’s popcorn-worthy time in Big D and Terrell Owens is nowhere to be found. Though, another diva that once played for the Dallas Cowboys is at the center of this drama.

Still unsigned after Dallas released him this past spring, former Pro Bowler Dez Bryant took to Twitter to absolutely blast the Cowboys’ organization. That included owner Jerry Jones as well as former teammate Sean Lee, who Bryant called a “snake.”

Well, Lee has decided to respond by throwing down the gauntlet in more ways than one.

WOW: #Cowboys Sean Lee response to @DezBryant ‘snake’ remark: ‘I love Dez. But we did butt heads cuz I wanted him to be more accountable. I think he needs to look at himself & hold himself accountable.’ pic.twitter.com/vzmv1WOLhM

“I love Dez. But we did butt heads cuz I wanted him to be more accountable. I think he needs to look at himself in hold himself accountable,” Lee said.

The NBA might be known as the league of petty, but it’s never going to overtake the NFL in terms of drama. This is next level insane. We’re not sure where this drama is going to take us. Heck, keep your Twitter open with a tab specifically focused on Bryant’s account. We know full well he’s going to respond here soon.

The same teammates who gave me the info?… with all this been said..he sat right across from me.. everything he said he could have addressed with me…sounds like a back stabber to me… https://t.co/zudHr9jujt

Drama in real time. How fun.

As it is, Bryant could very well sign with the Cleveland Browns here soon. Though, there’s also another unnamed team interested in him that’s unfazed with the free agent’s Twitter rant.

One thing we do know for sure. A reunion between the Cowboys and Bryant is completely off the table.