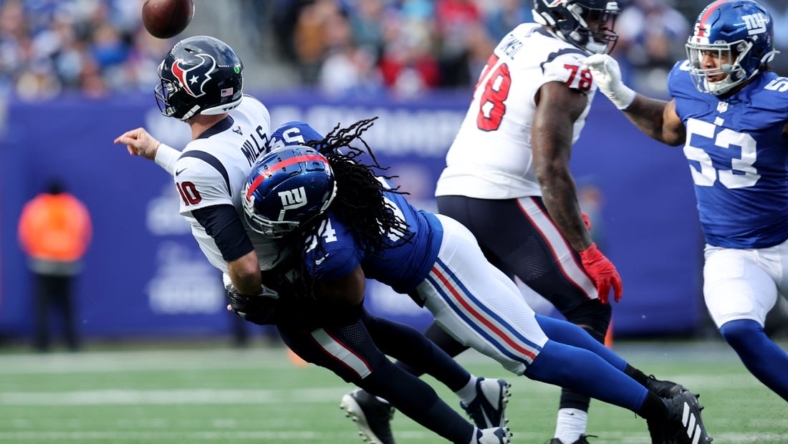 Saquon Barkley rushed for 152 yards and a touchdown as the New York Giants turned a third-quarter eruption into a 24-16 win over the visiting Houston Texas on Sunday in East Rutherford, N.J.

Barkley capped a 12-play, 74-yard march with a 2-yard touchdown run that answered a Houston scoring drive that cut the deficit to 14-10 midway through the third quarter. After totaling 182 yards in the first half, the Giants (7-2) recorded 149 yards on two third-quarter scoring drives.

The Giants’ first touchdown mark of the third quarter wasn’t as prolonged as the second.

Quarterback Daniel Jones adeptly avoided the rush just long enough to find Darius Slayton in the flat, and the wideout followed by avoiding the tackle of Texans rookie safety Jalen Pitre before darting up the sideline 54 yards for a touchdown. The score extended the Giants’ lead to 14-3 at the 12:33 mark.

Davis Mills and the Texans (1-7-1) managed a hasty response, covering 75 yards in seven plays with the quarterback completing all four of his pass attempts for 64 yards — including a 12-yard touchdown toss to Nico Collins.

But after Barkley gave the Giants a 21-10 lead, the Texans were slowed by a pair of turnovers.

Texans rookie running back Dameon Pierce fumbled at the Giants’ 10 on the drive following the Barkley score, with Giants linebacker Jaylon Smith recovering the fumble.

In the fourth quarter, Mills had his scoring pass to Brandin Cooks wiped away by a holding call on rookie guard Kenyon Green. On the next snap, Giants safety Dane Belton picked off Mills in the end zone.

The first half was an offensive slog for both teams.

The Texans failed to muster a first down in the first quarter, amassing minus-3 yards on nine plays across three possessions. The Giants, meanwhile, showed early promise but failed to maintain their momentum.

Keyed by a 36-yard Jones-to-Slayton pass play, the Giants grabbed a 7-0 lead at the 7:51 mark of the first on Jones’ 9-yard scoring pass to tight end Lawrence Cager. The Giants totaled 113 yards in the period and possessed the ball for 10:07 but mistakes in the second proved costly.

Guard Jack Anderson was whistled for a false start on 4th-and-1 in Houston territory, a miscue that forced the Giants to punt. Later in the second, Maliek Collins and Christian Kirksey combined for a third-down sack of Jones that pushed the Giants out of range for a field goal.

Aside from a seven-play, 61-yard drive that resulted in a 38-yard Ka’imi Fairbairn field goal — Pierce broke off a 44-yard scamper on that possession — the Texans accumulated 25 yards in the half and trailed 7-3 at the break after recording more punts (five) than first downs (four).