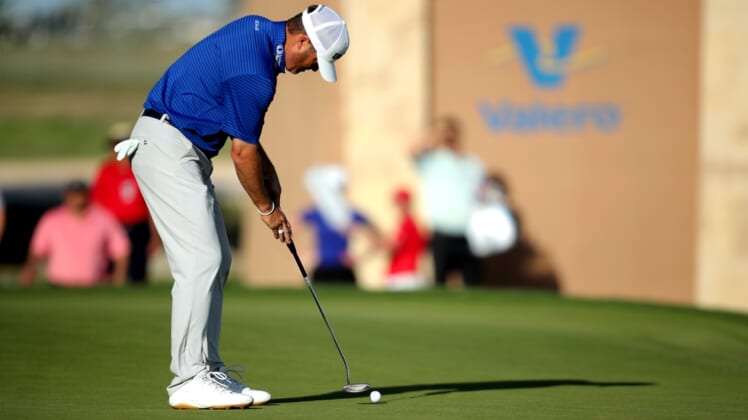 Ryan Palmer holds the lead at the midway point of the Valero Texas Open at TPC San Antonio, and his list of weekend challengers won’t include two of golf’s biggest names.

Bryson DeChambeau and Northern Ireland’s Rory McIlroy both missed the cut on Friday.

Palmer carded a bogey-free, 6-under-par 66 in the second round to build a two-stroke advantage at 10-under 134. Kevin Chappell (second-round 65), Matt Kuchar (69) and South Africa’s Dylan Frittelli (66) share second place at 8 under.

Palmer had three separate runs of back-to-birdies in a consistent round.

“Awesome,” he said. “Bogey-free on this golf course is good any day, but when you throw in the winds we had, it makes it that much more special.

“I’m excited the way I’m driving the ball again. I spent the last month and a half really struggling, and my results have kind of shown. I’m able to take the left side of the golf course out of play now and I brought it here this week and it’s showing.

Chappell also had a bogey-free round, highlighted by sinking a 4-foot eagle putt on the par-5 second hole.

“I hit the tee shot kind of right rough not too far from where I was looking,” Chappell said. “Just the number fit, it’s like a 6-wood that I have and we’re trying to get up there short left of the green, and the ball came out perfectly. Not sure where it landed, but all of a sudden we see it up there 4 feet right of the hole and were able to convert.”

Kuchar was 1 over par for the day through 13 holes, but followed with four consecutive birdies and then a par.

Defending champion Jordan Spieth is tied for 47th at 2-under 142 following a 70.

The San Antonio tournament champion would earn a berth in next week’s Masters if he is not already qualified.