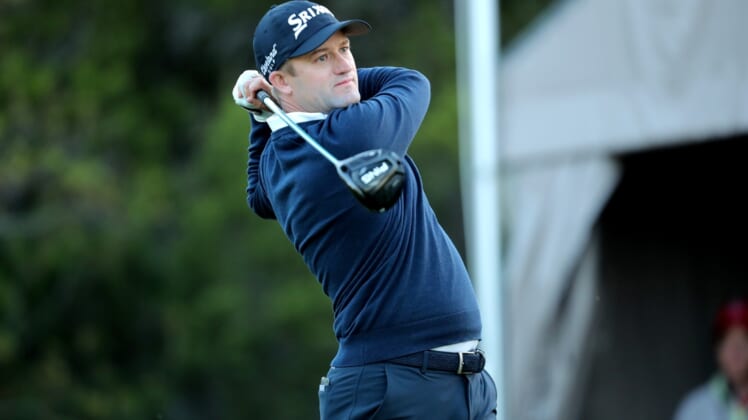 Scotland’s Russell Knox used a string of four consecutive birdies on the back nine to post a 7-under-par on 65 Thursday, good for a one-shot lead in the Valero Texas Open at TPC San Antonio.

Knox hit 12 of 14 fairways and 14 of 18 greens in regulation to take the pole position ahead of Denmark’s Rasmus Hojgaard, who shot a 6-under 66.

If the winner of the Texas Open is not already qualified for the Masters, he would be awarded a spot in the field in next week’s first major of the season. Knox is among those who would secure the Masters invite with a win.

“I would love to win and get to play next week,” Knox said. “That’s obviously why I’m here and everyone should be playing. I know my game is good, so I’ve got to keep playing and see if I can have a great finish.”

Knox used strong iron play to give himself three birdie putts shorter than 10 feet from Nos. 12 to 14. Then, at the par-4 15th, he tapped it downhill from the edge of the fringe and managed to hit the middle of the flagstick from 17 1/2 feet.

“Hit a beautiful drive down there, hit 6-iron just over the back and was able to get that in from (17) feet from the fringe,” Knox said. “That was one of those kind of bonus birdies that you need when you’re going to have a good day.”

Two of Knox’s seven worldwide wins have come on the PGA Tour, but he hasn’t won stateside since August 2016.

While Knox carded seven birdies and no bogeys, Hojgaard had a more up-and-down day that began on the back nine. He got a 39-foot eagle putt to drop at the par-5 18th hole and made the turn in 6-under 30. After spending time at 8 under following birdies at Nos. 1 and 6, he was all over the place at the par-4 ninth and finished with a double bogey.

“I didn’t feel like I hit that bad of a tee shot, (but) I had to chip sideways back into the fairway,” Hojgaard said. “Had I think 133 meters to the flag, just was a little too aggressive with that shot. Yeah, short-sided myself and I didn’t get up and down and suddenly you walk away with double bogey. Yeah, that was a bit annoying, but it happens.”

Kuchar started on the back nine and sank four birdies in a five-hole stretch for a hot start. He cooled down with two birdies and one bogey over his final nine. The 43-year-old is in the hunt for his 10th PGA Tour title and his first since 2019.

“This course is one of my favorites out on Tour,” Kuchar said. “There’s a lot of … good and bad that can happen here. I feel like this place really punishes the bad shots, but it’s a type of course that it rewards good quality shots.”

Spaun was 1 over through seven holes before holing out from 87 yards for eagle at the par-5 eighth. That got him back under par and propelled him to 5 under. McCarthy also managed an eagle, his coming at the par-5 14th on an 12-foot putt.

Defending champion Jordan Spieth, a Texas native, opened with an even-par 72, as did Rory McIlroy of Northern Ireland and Rickie Fowler. Bryson DeChambeau and England’s Lee Westwood turned in rounds of 1-over 73, and Japan’s Hideki Matsuyama shot a 2-over 74.