Richaun Holmes expected to be traded from Sacramento Kings this offseason

The Sacramento Kings might have made the trade that raised the most eyebrows ahead of the NBA trade deadline in which they sent Tyrese Haliburton to the Indiana Pacers for Domantas Sabonis. One of the players who wasn’t traded, despite many rumors, was center Richaun Holmes.

Holmes, who signed a four-year, $46.5 million contract extension in August, hasn’t experienced the same success as he did a year ago. Not only is Holmes scoring fewer points and grabbing less rebounds, his assist, steal and block rates are all lower as well.

Of course, this all has been paired with fewer minutes per game in yet another uncompetitive season for the Kings.

Holmes no longer appears to be a valued member of the core. Although his new contract has a 15% trade kicker attached, meaning his salary would increase by that amount if traded, the Kings may be looking at parting with Holmes this offseason.

According to Jason Anderson of the Sacramento Bee, the Kings are expected to engage in talks to trade Richaun Holmes this offseason. He also adds that the Kings were working up until the trade deadline to try and get a deal done immediately, but it didn’t come to fruition.

Instead, Holmes may be joining a new team during the offseason, if the Kings can find a trade partner for his contract. Holmes is locked in through the 2024-25 NBA season and is currently 28 years old.

While there should be several teams interested in adding a big like Holmes, they’ll likely also want to get him back on the path that earned him the contract extension in the first place. Not even being able to crack the starting lineup on one of the worst teams in the NBA, even before the Sabonis trade isn’t exactly an accomplishment.

We’ll see what happens this offseason when the Kings are expected to continue making moves as they shape their roster. 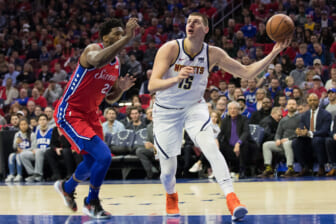