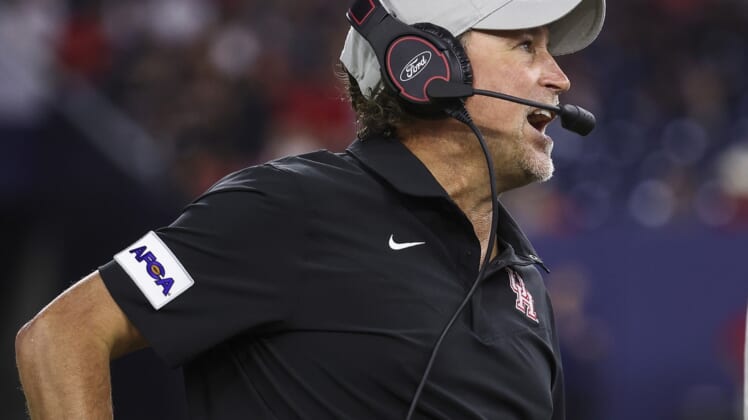 It will require time for Rice first-year offensive coordinator Marques Tuiasosopo to leave his imprint on the Owls’ offense, but given his extensive experience, an impact seems inevitable.

The Owls (0-1, 0-0 Conference USA) will host the Houston Cougars (0-1, 0-0 American) on Saturday at Rice Stadium in the 40th edition of the Bayou Bucket Classic (and 43rd meeting overall) on the 50th anniversary of the first meeting between the crosstown rivals. The Cougars lead the series 31-11, have won the past five meetings, and are seeking to match their longest win streak in the series (1987-92).

Tuiasosopo joined the Rice staff last February after spending the previous 12 seasons coaching in the Pac-12. He played eight seasons in the NFL, and the Owls are hoping to capitalize on that track record while attempting to build a formidable offense in Conference USA.

The tandem of Wiley Green and Luke McCaffrey passed for 227 yards and a touchdown in the Owls’ 38-17 loss to Arkansas Sept. 4. That represented the first step on the road to progress.

“I think he’s got some really good ideas in the pass game,” Rice coach Mike Bloomgren said. “There are so many concepts that aren’t going to be different. We all connect the Xs and Os on the board largely the same in this game. There’s not a lot of innovations really going on in 2021.

“But, you may read it differently and you may express it to the quarterback in a different way. And since he’s been a quarterback and was a quarterback in the National Football League he’s got such a great way to disseminate that information to those quarterbacks — and I just love watching those guys and the confidence and the clarity you see in their feet to their throwing motion to getting the ball out on time.”

Houston coach Dana Holgorsen expressed some reservations over playing Texas Tech in the opener, at least from the perspective of familiarity serving as a detriment. Holgorsen spent eight seasons on staff with the Red Raiders, and several members of their current staff either shared a coaching history or philosophy with Holgorsen from years past when their paths crossed.

The Red Raiders dominated the second half last Saturday, blanking the Cougars 31-0 following the intermission en route to a 38-21 victory. Texas Tech had touchdown drives of 71, 60 and 48 yards and also returned an interception for a score while rallying from a 14-point halftime deficit.

Still, Holgorsen has reason to remain optimistic over the maturation of his team. Defensively, the Cougars returned eight starters from last season although some were demoted following intense competition during camp, a competition that should improve Houston in the long run.

“I feel good about where our depth is on defense more than anything,” Holgorsen said. “As far as defense and leadership I obviously feel much better about that. We have four or five defensive team captains.”

Holgorsen will lean on those defensive captains — seniors Deontay Anderson, Marcus Jones and Damarion Williams, junior Donavan Mutin, and sophomore Hasaan Hypolite — to help the team turn the page from a disappointing season opener. The need to rebound against Rice is apparent.

“Rice is a good football team and we’re going to have to flip that switch,” Holgorsen said. “That’s really where I hope their leadership kicks in.”