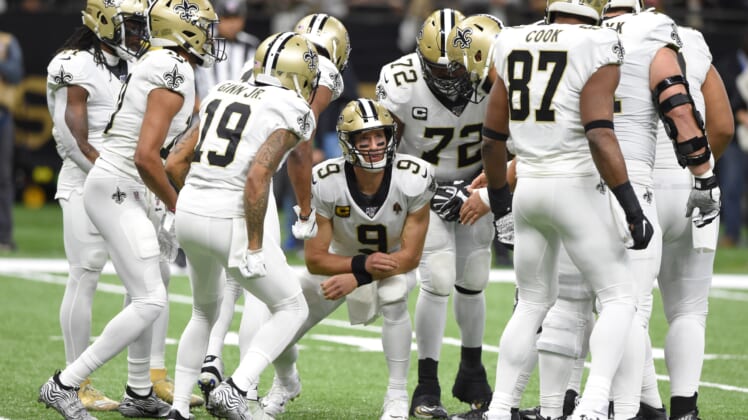 Drew Brees has issued a public apology for comments he made about “disrespecting the flag” Wednesday. But his New Orleans Saints teammates are reportedly furious about his stance, and the situation in the locker room is not great.

Drew Brees: ‘I’ll never agree with anybody disrespecting the flag’

Brees was being interviewed on video chat by Daniel Roberts of Yahoo Finance. Roberts alluded to the notion that many players may choose to take a knee during the anthem this coming NFL season.

This, of course, was in reference to the ongoing national protests against police brutality toward African-Americans in light of the death of George Floyd.

It was an opportunity for Brees to show compassion for his teammates, but instead he shared his personal take on the anthem and American flag: “I will never agree with anybody disrespecting the flag of the United States of America or our country,” Brees said.

To say his comments were not well received would be the understatement of the century. Social media was on fire all throughout Wednesday as NFL players and other pro athletes blasted Brees for his remarks.

On Wednesday, Dianna Russini of ESPN shared that players did not want to provide the media with quotes as they processed what Brees said. She also said the team has a plan to handle this issue “in-house.”

However, as the evening progressed, one of Brees’ teammates, Malcolm Jenkins, made it clear he was very angry and upset.

“Our communities are under siege, and we need help,” Jenkins said in an Instagram video (via ESPN) “And what you’re telling us is don’t ask for help that way. Ask for it a different way. I can’t listen to it when you ask that way. We’re done asking, Drew. And people who share your sentiments, who express those and push them throughout the world, the airwaves, are the problem.

“And it’s unfortunate because I considered you a friend,” Jenkins said. “I looked up to you. You’re somebody who I had a great deal of respect for. But sometimes you should shut the f— up.”

Another teammate, Cameron Jordan, spoke with Michael Silver of NFL.com. When asked if this issue will leak into training camp, he responded by saying, “I mean, of course it will. In our locker room, we hold people accountable.”

“I’ve already talked to 10 to 12 teammates, and a coach or two, and with the man himself (Brees),” Jordan said. “You have to put him legitimately in our shoes, and at the same time, I don’t want to force feed him. I want to walk in his shoes, too. [The national anthem] is a source of pride for him. But he has to know what that act is all about, and what it really represents.”

Saints expressing ‘fury’ as situation in locker room is ‘beyond tense’

On Thursday morning, Mike Freeman of Bleacher Report shared what he’s learned. He reports “the fury over what Drew Brees said is even worse than I thought.”

“The flag is a thing. It’s a symbol,” one Saints player said in response to Brees’ take. “An important one. But George Floyd was a human being who was murdered like he was a f****** dog.”

The second player was grieved that Brees doesn’t seem to understand his plight: “How could Drew be around a locker room of black men and know nothing about what happens to us?”

Freeman also shared that players want to shift the conversation away from Brees to “a more national one about policing and race.” However, he made it clear that things “are beyond tense” in New Orleans’ locker room right now.

Given the way Brees’ apology was received on Thursday morning, I’d say that Freeman hit the nail on the head.