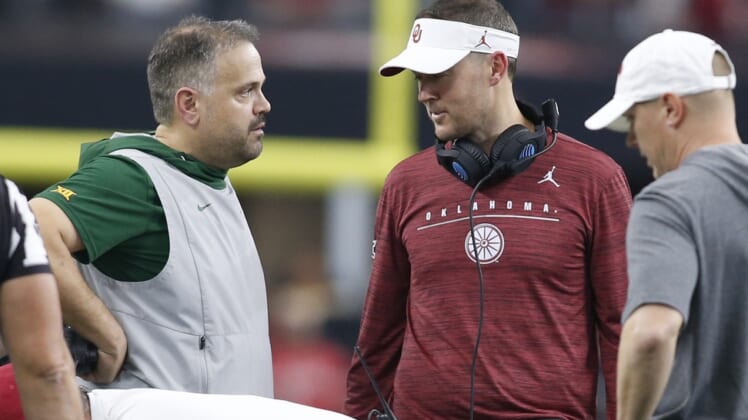 While Dallas Cowboys head coach Jason Garrett prepares for a critical game against the Los Angeles Rams in Week 15 with playoff hopes on the line, owner Jerry Jones is reportedly thinking about who could replace Garrett as the team’s next coach.

According to CBS Sports’ Jason La Canfora, Jones has followed the success of Baylor head coach Matt Rhule and Oklahoma head coach Lincoln Riley closely and both are hot on the team’s radar.

While the Cowboys (6-7) currently sit atop the NFC East, the team looks like it could suffer a first-round exit in the postseason if it even makes it in. Jones and the fan base hold Super Bowl aspirations for this team, expectations that Garrett’s team has always fallen well short of.

A loss on Sunday to the Rams, in front of the home crowd at AT&T Stadium, would push Dallas two games below a .500 record. It could also serve as the nail in the coffin to Garrett’s tenure, who has survived through recent votes of confidence.

Rhule took over a Baylor program that found itself in the middle of chaos and disgrace when he entered. After going 1-11 in his first season, the team experienced a remarkable turnaround in 2018 with a seven-win season. The Bears won 11 games this season and faced Riley’s Sooners in the Big 12 Championship Game at AT&T Stadium.

Riley has emerged as one of the most creative offensive minds in football at all levels. Oklahoma is 36-5 since he took over in 2017 and Riley saw quarterbacks Baker Mayfield and Kyler Murray both win the Heisman Trophy and be selected with the No. 1 pick in consecutive drafts.

If either Rhule or Riley expresses interest in moving to the NFL and becoming the Cowboys next head coach, it could transform Dallas’ offense, elevate quarterback Dak Prescott and potentially help this team reach its full potential.