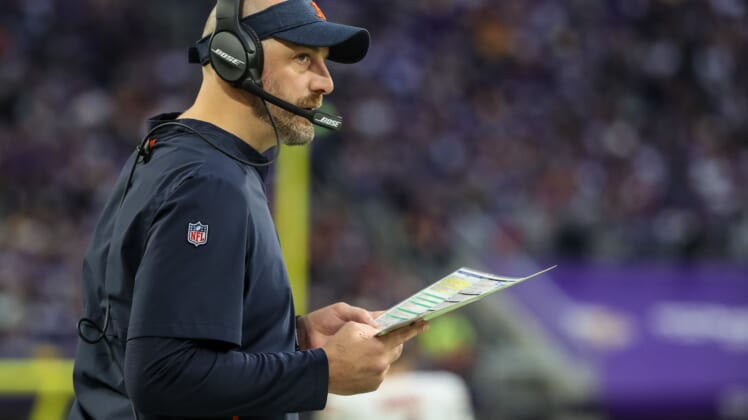 Coming off a breakout 2018 season, Chicago Bears head coach Matt Nagy and general manager Ryan Pace were considered to two of the biggest stars on the rise in the NFL. Now, coming off a disappointing 2019 season and with pressure in Chicago mounting, there’s reportedly believe in the NFL that both could be fired after the 2020 season.

In Matt Miller’s latest scouting notebook, a former NFL executive said there are already rumors around the NFL that Nagy and Pace will both be fired after the upcoming season. If that happens, many expect Nagy would return to the Kansas City Chiefs to replace Eric Bieniemy as offensive coordinator when he takes a head coaching gig.

The Bears surprised everyone in 2018 under Nagy and Pace, improving from a five-win team in 2017 to a 12-4 record the following season. Considered by many at the time to be a Super Bowl contender, the Bears were knocked out in the wild-card round after Cody Parkey missed the game-winning field goal.

Nagy was named Coach of the Year and Pace earned Sporting News’ Executive of the Year honors after the season. Many expected quarterback Mitch Trubisky to take a step forward and for the team to compete for the Super Bowl. Instead, Trubisky regressed and the offense fell apart as the team finished with an 8-8 record.

While Pace’s blockbuster trade for Khalil Mack paid off, many of his other decisions did not. Most notably, trading up to take Trubisky with the No. 2 pick and passing on Patrick Mahomes and Deshaun Watson. He also drafted first-round bust Leonard Floyd in the 2016 NFL Draft and will not have a first-round selection this year.

The Bears acquired Nick Foles this offseason in the hopes he can either bring stability at quarterback or that being challenged will help Trubisky. But if the Bears fall short of the playoffs this upcoming season, it seems likely that significant changes are coming.