Pro Bowl 2015 Voting: A Guide to Quarterbacks and Running Backs

The Pro Bowl is an increasingly flawed voting process, especially as we figure out Pro Bowl 2015 voting. Already a popularity contest at the most obscure positions, changes in voting procedure have turned it less into a measure of merit and more a determinant of relative market strength. Regardless, we strive our best to create a good ballot—whether that means the best players or our hometown players. Part of an ongoing series to guide your Pro Bowl ballot, we start with the quarterbacks and running backs.

Aaron Rodgers is playing the best football of any QB in recent NFL history.

At the quarter-mark of the season, it would have been justified to keep Tom Brady off the ballot, but with his performance since then, it would be difficult not to chalk up the traditional four as automatic entrants. Aaron Rodgers is an automatic vote, and though Peyton Manning has struggled, his lows still aren’t as bad as some other deserving passers, he’s put games away with efficiency. Tom Brady isn’t as active as the other elite quarterbacks thanks to a strong run game, but he’s been as consistent as ever since his turnaround and has avoided mistakes. Drew Brees on a losing team has been arguably better in attempting to cover for his defense’s mistakes and an offensive corps that wasn’t as impressive as last year. Of the four, Drew Brees may actually be the second-most consistent—he’s really only had one bad game.

After that, the decision largely comes down to Philip Rivers, Tony Romo, Ben Roethlisberger and Andrew Luck. In terms of raw rate statistics, all four are relatively comparable, though Big Ben is the only one of those four who would drop out of that category entirely once you eliminate his best game. Even the advanced statistics are only mildly impressed with Roethlisberger sans his Indianapolis outing. As for Rivers, Romo and Luck the question of overall performance against consistency drags on all of them. 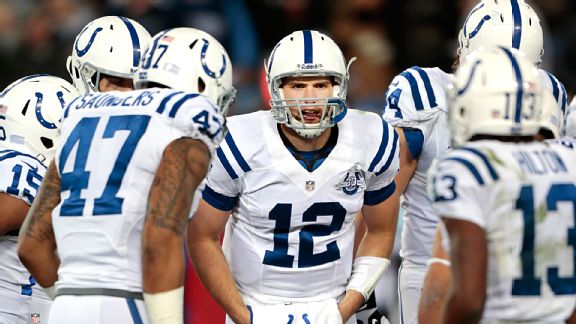 Courtesy of ESPN.com: There is very little doubt that Luck will earn a third Pro Bowl in as many seasons.

Luck’s throw-to-throw inconsistency hasn’t been as big a problem in games in terms of his contributions to wins or losses—his two-interception effort against Baltimore featured negative plays that weren’t his fault, with an interception as he was hit combined with an interception clattering off the hands of Ahmad Bradshaw. The loss to Pittsburgh wasn’t nearly his fault either—scoring 34 points and making up for the one interception (a pick-six) that was his fault with three touchdowns of his own and a deep pass that should have been a better effort by Hakeem Nicks in the end zone, instead leading to another interception. Regardless, his consistency within games is concerning, especially coming off of a narrow win against Cleveland that he was nearly responsible for losing.

On the other hand, Rivers and Romo have been bad from game-to-game, instead of merely moving back and forth within games, like Luck. Honestly, all seven of these quarterbacks deserve votes, but because Luck has made up for his mistakes in game, one of either Rivers or Romo has to be left out. Romo has had a higher stake in his bad statistical outings than Luck, more deserving of blame when interceptions hurt his team. Given that Luck’s aggregate statistics are more in line with his talent this year than last, Luck is an easy shoo-in.

Despite the increased offensive efficiency and the mantra that Romo “no longer” has to carry the offense, he has been the source of almost all of the games where Dallas has suffered from offensive woes, though you can excuse the Washington game where he had to leave and heroically came back. Still mediocre showings against San Francisco and Philadelphia, along with an extremely tepid win against a Tennessee team, put him behind Rivers.

Rivers has one embarrassing loss on his resume, a three-interception shutout against the Miami Dolphins—worse than any game Romo put together. But aside from that, a 30-point 30-41-252-3-2 showing against Denver is better after considering the interceptions. One was in the fourth quarter when playing from two scores behind; in the hands of Malcom Floyd before being grabbed out of the breadbasket by Rahim Moore. The other interception was because Keenan Allen slipped and fell.

Rivers has near-elite statistical production despite pass protection on par with Tom Brady’s—worse even, after the Patriots figured out their optimal line configuration. He is the only quarterback out of the eight candidates to be pressured on over a third of his dropbacks. His receiver corps and running threats do not match Tony Romo’s, nor does his offensive line, and he doesn’t make as many mistakes; it’s easy to believe in reversed situations that Rivers would outpace Romo.

Courtesy of Huffington Post: Since Week 1, Murray has provided Dallas the running game it desperately needs.

Running backs are a little easier to vote on this year than other years; the difference between sixth and seventh is not as heart-wrenching as it had been in years past (in 2011, we had to contend with LeSean McCoy, Matt Forte, Adrian Peterson, Arian Foster, Ray Rice, Frank Gore, Marshawn Lynch, Maurice Jones-Drew and even Willis McGahee and Ryan Mathews).

Bell isn’t just racking up large volumetric totals, either. He has great efficiency from a yardage perspective (4.8 yards a carry) and a success rate perspective—with the highest expected points success rate in the NFL (per Advanced Football Analytics) and one of the few running backs with an above-50 percent down-and-distance success rate (per Football Outsiders). It’s difficult to find high volume totals next to consistent successes, especially for a running back whose yards after contact rank above 2.5 per attempt. Le’Veon Bell has arguably added more to wins than DeMarco Murray has.

After that, the next two choices are easily Marshawn Lynch and Jamaal Charles. Lynch leads qualifying backs in yards after contact per attempt and ranks just behind Murray and Bell in expected points success rate. Moreover, he’s sustained an offense that’s been struggling to replicate its passing success. The Seahawks actually rank 8th in points per drive, despite the fact that their passing ranks about 20th in efficiency. He’s a high-scoring back (he has 12 receiving and rushing touchdowns) on an offense that otherwise would find it difficult to score (without him, they have 17 total touchdowns).

Jamaal Charles is one of a few backs with at least five yards a carry, and has the second-highest down-and-distance success rate among running backs. Though he doesn’t contribute as much to wins as Murray or Bell, he’s close in an offense that still can’t find a wide receiver in the end zone. He gives the Chiefs the ability to play it safe in the passing game—one of only four offenses with more runs over twenty yards (9) than completions (6).

Lamar Miller has excellent efficiency; he has 4.9 yards per carry, the highest down-and-distance success rate in the NFL, and is a solid running back when targeted, but with only 150 rushing attempts and lower than 800 rushing yards (and below 1000 yards from scrimmage), he needs to be excluded. The Miami offense does well enough without him on the field despite their terrible passing numbers.

Arian Foster has had very few games to prove himself, and though is average an extremely high 5.0 yards per carry, does so with an average success rate and is a shocking liability in the passing game despite his reputation, with the highest drop rate of the remaining candidates, and the most pressures allowed per snap. A lot of stuff outside the box score discredits Arian Foster’s contribution to the offense more than his obvious stuff helps. 11 touchdowns in 9 games is difficult to ignore, though. For now, however, he loses on the “unseen” tiebreakers

Between Eddie Lacy, Matt Forte and the surprising Justin Forsett, a tough decision has to be made. Though he too only has 180 carries, Forsett’s efficiency is hard to ignore; it doesn’t come out merely above average in some areas and pedestrian in others, like Arian Foster. 5.6 yards per carry is difficult to replicate, and it’s because of him that the Ravens have 17 runs of over 20 yards. 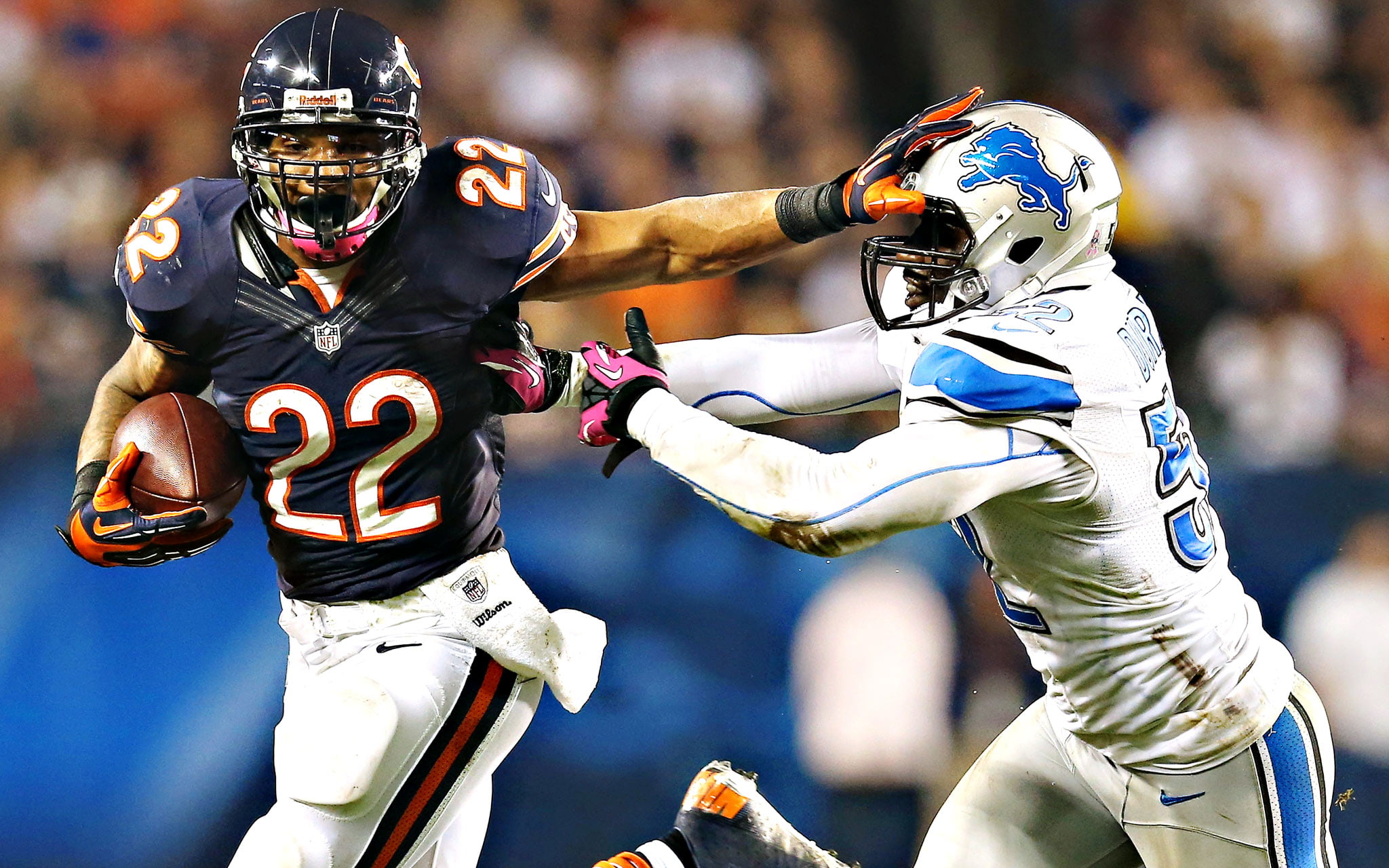 Matt Forte has touched the ball more than Lacy or Forsett (240 to 206 and 214) and has done more with it, with nearly 1600 yards from scrimmage—third-best in the NFL. A low-scoring back in a previous life, he now has nine combined touchdowns, tied for fourth among running backs. It was already mentioned above, but Forte is in the company of Le’Veon Bell for being one of only two backs to be on pace to hit the 1000/500 yard markers in running and receiving.

Still, though Forte may be a leading fantasy running back, he’s not as efficient as either Arian Foster or Justin Forsett, and Eddie Lacy outpaces all three in important efficiency metrics—especially because he’s been in more important game situations than Forte, Foster or Forsett where he’s performed, without the baggage of giving up yards through allowing pressures or drops. Lacy has dropped zero passes, and is the single-best back at preventing pass-rushing pressure in the NFL, only allowing one hurry on 60 pass-blocking snaps. He outpaces Forsett and Foster in yards per route run (but is behind Forte) and leads the group of four in yards after contact per attempt, missed tackles forced and Pro Football Focus’ “elusiveness” ranking (ranked second overall).

This set of resumes to me leads to an Eddie Lacy vote. The other vote should go to Justin Forsett, who isn’t just averaging an absurd yards per carry (the best out of all the backs in consideration), but is doing it with fewer unseen mistakes in pass protection or drops than either Foster or Forte. He has more yards on the ground than either, and the second-highest yards per touch in the NFL among running backs (5.8, just below Le’Veon Bell’s league-leading 6.0).