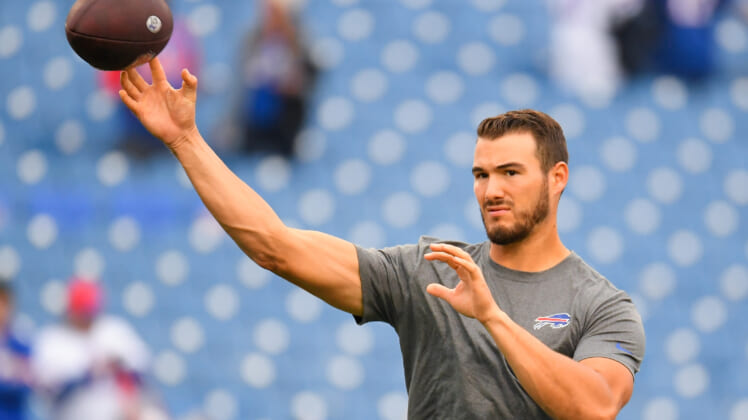 Pittsburgh Steelers offseason free-agent addition Mitchell Trubisky is preparing for the upcoming season like he will be the starter in Week 1.

With team legend Ben Roethlisberger retiring, it was a priority for the Steelers to add a veteran QB capable of being a competent NFL starter in 2022. That’s why former Chicago Bears’ first-round pick Trubisky was one of the most notable signings the organization made over the first few months of the NFL offseason.

However, after five seasons in the league and stints with the Bears and Buffalo Bills, Trubisky is far from a sure thing as a long-term answer. That is why the team used a first-round pick on Pittsburgh University signal-caller Kenny Pickett. A player head coach Mike Tomlin admitted, after selecting him in the NFL Draft, will have an opportunity to compete for the starting job in 2022.

Even though he has the kind of competition he may not have expected when he signed his 2-year, $14 million contract in March, Trubisky is in June minicamp preparing like he will be the team’s Week 1 starter and is feeling “very confident” he will achieve that goal.

“I’m preparing to be the starter,” Trubisky said on Wednesday. “I feel like no matter what position you’re in, that’s what you should prepare like. So we’re all pushing each other, we’re all competing every day. Like you said, I wouldn’t read too much into [taking first-team snaps]. But I’m getting a lot of good reps. I feel really comfortable in the offense. So I like where we’re at right now. I feel very confident.”

Trubisky is taking the majority of the first-team snaps in Pittsburgh Steelers minicamp. However, doing so in June is far from a guarantee that he will be doing that in September. But considering his experience, and the money he is making over the next two seasons, it would be a major surprise if he isn’t the starter when the team opens the season on the road against defending AFC Champions the Cincinnati Bengals.