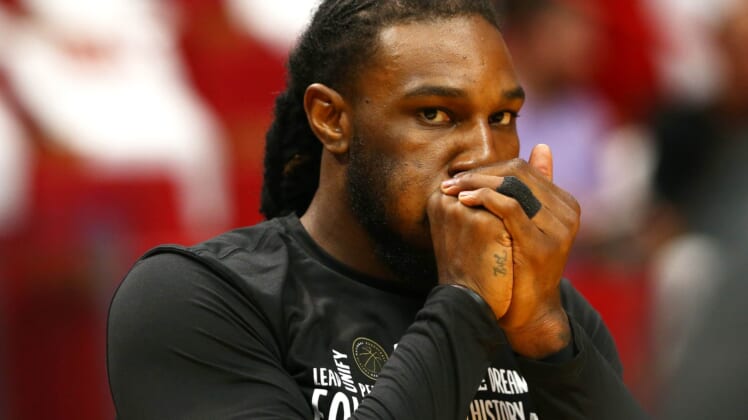 The Suns made their biggest move of the offseason with the huge trade for Chris Paul. On Saturday, with NBA free agency open, Phoenix made another nice addition to boost its starting lineup for the upcoming season.

According to The Athletic’s Shams Charania, Jae Crowder is signing a three-year contract worth $30 million.

While the Suns could have brought back Dario Saris, a restricted free agent, the team opted for Crowder’s experience and strength. The 6-foot-6 forward has played in 72 playoff games during his career, with 51 starts.

Crowder played an integral role during the Miami Heat’s run to the NBA Finals this past season, averaging 12 points and 5.6 rebounds per game. He was sharp from beyond the arc, shooting 34.2% and reliable from the free-throw line (76.1%).

Expect the 30-year-old to start at power forward, providing some grit and muscle next to Deandre Ayton. With Paul facilitating this fast-paced attack and Devin Booker on the outside, the Suns stand a great shot at making the NBA Playoffs this season.

Phoenix Suns rumors: What is next after Chris Paul blockbuster trade?

The Phoenix Suns pulled off a blockbuster trade for future Hall of Fame guard Chris Paul, sending Kelly Oubre to the Oklahoma City Thunder as the centerpiece in the deal. Paul will now team up with Devin Booker to form one of the most-talented backcourts in the NBA.

For Suns general manager James Jones, this has been a long time coming. The team has done everything possible to find Booker a running partner. Despite some success last season, Ricky Rubio was not the answer. Hence, why he was a part of the above-mentioned Paul trade.

Now, less than 48 hours from the 2020 NBA Draft, the attention turns to what Phoenix plans to do with the 10th overall pick. We had previously indicated the team would look point guard. That is no longer the case following the addition of Mr. Paul. Instead, our latest mock has Phoenix selecting Florida State wing Devin Vassell to indirectly replace Oubre. Vassell shot 42% from three-point range for the Seminoles a season ago. He’d be a marked upgrade from the perspective over the likes of Mikal Bridges and Cameron Johnson.

However, there’s ample possibilities for Phoenix in the upcoming NBA Draft. Aaron Nesmith from Vanderbilt and Villanova’s Saddiq Bey come to mind first.

Fresh off acquiring Paul, the Suns can also turn their attention in free agency to retaining Dario Saric and Aron Baynes. Phoenix took on salary be trading for Paul. However, it can go over the salary cap in order to re-sign these two core rotational players. There’s also a chance that the Suns attempt to trade either Bridges or Johnson for another veteran or to recoup some of the draft capital they lost in the Paul deal.

Phoenix Suns rumors this offseason will undoubtedly include the team looking to upgrade at point guard over Ricky Rubio. It’s not a secret that Phoenix has been attempting to find a running partner for stud two-guard Devin Booker in the backcourt. It also now appears that Chris Paul could be part of the equation.

ESPN’s Brian Windhorst and Tim Bontemps reported Tuesday evening that the Suns are engaged in trade talks with the Oklahoma City Thunder for the future Hall of Fame point guard.

“Talks have been ongoing and continued to gather traction, but there is no deal imminent, sources said. There is currently a moratorium on trades as the NBA goes through procedures to start next season ahead of the league’s draft next week,” the report read.

It must first be noted that no trades can be completed until the moratorium ends. That should be some time around Nov. 20 when teams can enter into contract talks with free agents based on a newly-signed CBA between the NBA and its players.

As for this specific Suns-related rumor, it’s not a surprise that Phoenix would be interested in Paul. Despite his bloated contract and advanced age (35), Paul continues to play at a high level. The 10-time All-Star averaged 17.6 points, 5.0 rebounds, 6.7 assists and 1.6 steals while shooting a resounding 49% from the field in his first season with OKC after being acquired from the Houston Rockets in the Russell Westbrook blockbuster.

Related: Trades that could shake up 2020 NBA Draft

Phoenix Suns rumors: How would a Chris Paul trade look like?

Coming off a tremendous performance during the NBA restart in Orlando (8-0 record), these Suns are in a great position to improve during the offseason. They’ll have north of $20 million to spend in free agency. The team also has young players to offer up in a rumored Paul trade.

However, the finances would have to work. That’s where we start to look at the logistics if this rumor were to come to fruition. Playing under a four-year, $159.7 million contract, Paul is slated to count $41.36 million against the cap in 2020-21. That would be a huge number for the Phoenix Suns to take back. It would also require Oklahoma City receiving hefty contracts in return.

Rubio would be nothing more than a salary throw-in. As for Oubre and the two younger forwards mentioned above, they’d definitely be attractive for Oklahoma City. Specifically, Oubre would make sense. The 6-foot-7 wing is only 24 years old. He averaged 18.7 points and 6.4 rebounds for Phoenix a season ago.

Given Paul’s contract, it’s highly unlikely that the Suns would have to throw in their first-round pick in next week’s draft (10th) overall without receiving anything in return. The potential exists that Oklahoma City could offer up the 25th pick to make this work.

Long story short, this is how a trade might look if these rumors prove to be true.

Despite the 2020 NBA draft being seen as weak, it is relatively strong at the point guard position. Killian Hayes, Tyrese Haliburton, Kira Lewis and Cole Anthony could all be available with the 10th pick. If Oklahoma City opts to demand too much, Suns general manager James Jones has these players as backup options.

In addition to this, there’s proven NBA talent that could be linked to Phoenix via trades. We mentioned Collin Sexton of the Cleveland Cavaliers as an option in a previous article. Derrick Rose (Pistons) and Jrue Holiday (Pelicans) could be two cheaper options for the Suns.

As it is, the idea of teaming Paul up with Booker and Deandre Ayton might be too good for the Phoenix Suns to pass up on. Expect these rumors to pick up over the next week.