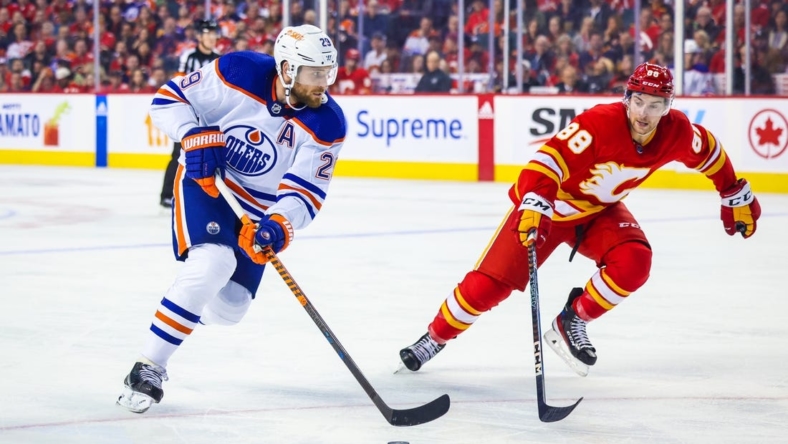 Zach Hyman scored two goals, including the game-winner with 7:36 to go, and Connor McDavid had a goal and two assists as the visiting Edmonton Oilers rallied for a 3-2 victory over the Calgary Flames in the Battle of Alberta on Saturday night.

Stuart Skinner finished with 40 saves for the Oilers, who extended their winning streak to four games.

McDavid scored his league-leading ninth goal of the season in the third period to tie it, 2-2, while Hyman extended his goal-scoring streak to four games with his 15th career multi-goal performance.

Mikael Backlund scored a short-handed goal, and Brett Ritchie also scored for Calgary, which had a two-game winning streak snapped. Jacob Markstrom made 23 saves for the Flames.

With Blake Coleman in the penalty box for high-sticking, Calgary took a 1-0 lead at the 4:29 mark of the second period on Backlund’s tally. The puck squirted past Edmonton defenseman Tyson Barrie along the left boards to Backlund, who then rushed in from the right wing and ripped a wrist shot through Skinner’s pads for his third goal of the season.

Edmonton tied it just 33 seconds later on Hyman’s power-play goal. Hyman was attempting to hit Leon Draisaitl with a crossing pass from the right circle, but the puck deflected in off the stick of diving Flames defenseman Noah Hanifin through Markstrom’s pads.

Calgary regained the lead at the 16:06 mark on Ritchie’s third goal of the season, matching his 41-game for the entire 2021-22 season. Milan Lucic set up the score with a backhanded pass from the boards behind the net past the stick of McDavid. Ritchie then buried a wrist shot off the left post past Skinner’s blocker side.

McDavid tied it midway through the third period when he snapped a sharp-angle wrist shot from along the left boards inside the near post past Markstrom’s stick side.

Hyman then gave the Oilers their first lead at the 12:24 mark of the third with his sixth goal of the season. McDavid set up the score when he picked up a loose puck in the slot and then backhanded a pass toward Hyman stationed near the left corner of the crease. The puck then caromed in off Hyman’s skate past Markstrom.

Hyman had two chances at a hat trick in the final minute but fired wide of the empty net both times.