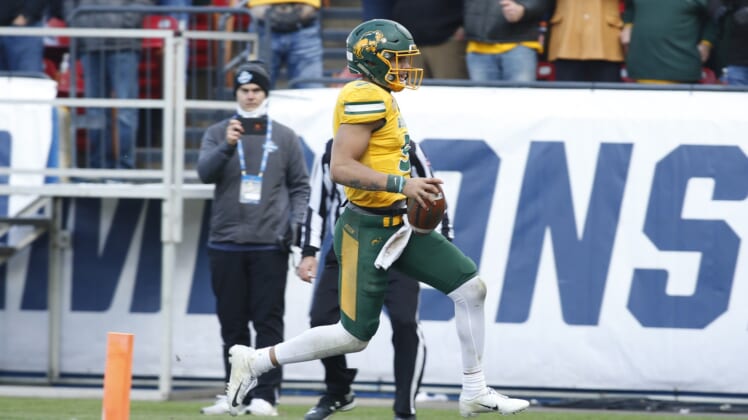 Nearly five years after North Dakota State saw Carson Wentz taken with a top-three pick in the NFL Draft, could Trey Lance declare for the 2021 NFL Draft and become the Bison’s next success story?

Coming off a historic 2019 season, the FCS star didn’t even need to play college football this fall. The NFL world was already buzzing about Lance’s potential, even with a 2021 draft class that could feature Trevor Lawrence and Justin Fields.

With his lone start of the 2020 season behind him, could Lance be prepared to declare for the 2021 NFL Draft?

According to ProFootballNetwork’s Tony Pauline, Lance is already preparing to declare for the 2021 NFL Draft. There’s already chatter that he has found representation with an agency, one of the most important steps in the process.

As of now, there’s no indication regarding a potential announcement. Lance certainly hoped to play a full season this year with his teammates, putting more great film out there for evaluators, but the COVID-19 pandemic wiped away that opportunity.

North Dakota State still tried to do right by its star passer. Shortly after the program suspended its 2020 football season, the Bison scheduled a showcase game against Central Arkansas. While it would be just a one-game sample for Lance and his draft-eligible teammates, the chance to play together one last time and impress in front of scouts was worth it.

Unfortunately, the Bison didn’t look quite as sharp on Saturday. Facing a team that already played three games this season, North Dakota State showed clear signs of rust early in the game.

Lance threw the first interception of his collegiate career, his only pick in 318 attempts across three seasons. The redshirt sophomore also completed just 15-of-30 attempts, just the second time in 16 starts that he hit on 50% or fewer of his throws.

The 6-foot-4 quarterback still delivered his share of impressive moments. He rushed for 143 yards and two touchdowns, marking the eighth time he has eclipsed 80-plus rushing yards in a game. Lastly, in what might have been his final quarter of collegiate action, North Dakota State’s leader led the team on a comeback with 21 points in the last 14 minutes to secure a 39-28 victory.

It certainly wasn’t the kind of jaw-dropping performance many grew accustomed to seeing, especially given the competition faced. However, one inconsistent start with plenty of rust won’t overshadow an incredible resume.

Entering the fall, many viewed Lance as a potential top-10 pick in the 2021 NFL Draft. While he only had one year of starting experience, the incredible talents he put on display in 2019 were as impressive as his eye-popping stats last season.

Lance took over as the Bison’s starting quarterback to open the 2019 season and never looked back. While he never attempted more than 31 attempts in his 16 starts, with 25-plus passes in just one game, Lance was incredibly effective and accurate as a passer.

A 28/0 TD/INT ratio is unheard of and an incredible accomplishment at any level. Lance avoided mistakes, always putting North Dakota State in position to dominate offensively. If his passing skills weren’t frustrating enough for defensive coordinators, Lance could just as easily torch them on the ground.

Lance was one of the best runners and passers in the FCS during the 2019 season. Unsurprisingly North Dakota State went 16-0 and won its third consecutive FCS national championship. Meanwhile, Lance came away with some trophies of his own. He was awarded the Walter Payton Award, given to the most outstanding FCS offensive player and won the Jerry Rice Award, awarded to the most outstanding FCS freshman.

It’s no wonder Lance caught the eyes of every NFL scout and general manager, even without being on the national stage.

Obviously, the pre-draft process will be crucial for Lance. Coaches will want an in-person look at his talents and there will still be doubts about whether or not Lance’s skills were overrated by playing in the FCS. Fortunately, the NFL Combine will give him a chance to prove all of his physical tools are for real.

There will be multiple NFL teams looking for a potential quarterback in the 2021 NFL Draft. We see organizations reach for a quarterback every year, which is another factor in Lance’s favor. In the end, no one should be surprised if he is a top-10 pick.