No. 2 Alabama scores in all three phases as it rolls Louisiana-Monroe 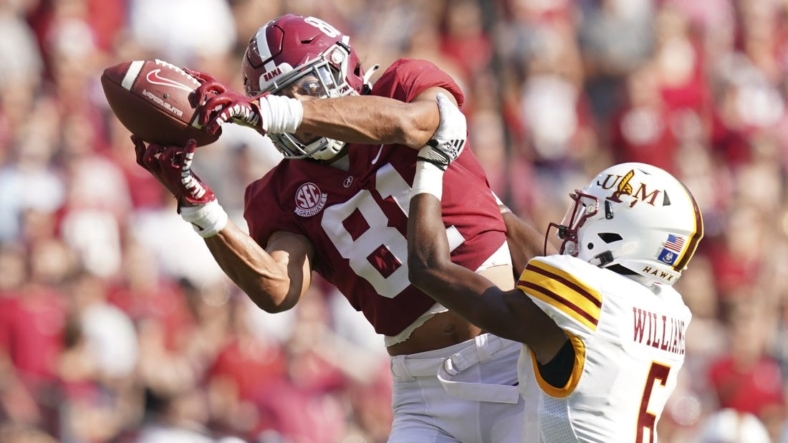 The second-ranked Alabama Crimson Tide scored touchdowns on offense, defense and special teams in the first quarter to roll to a 63-7 victory over visiting Louisiana-Monroe on Saturday in Tuscaloosa, Ala.

Bryce Young went 13-of-18 passing for 236 yards with three touchdowns and two interceptions as the Crimson Tide (3-0) earned their 55th straight win over a nonconference regular-season opponent.

Jahmyr Gibbs had four catches for 65 yards and a touchdown and rushed for 36 yards on four carries, while Roydell Williams ran for 58 yards and a score on eight carries.

After Young threw a 33-yard touchdown pass to Traeshon Holden on Alabama’s first possession, the Crimson Tide also scored on defense when linebacker Will Anderson Jr. returned an interception 25 yards for a touchdown.

The special teams were up next. Malachi Moore scooped up a blocked punt that was blocked by Ja’Corey Brooks and returned it three yards for a score with 8:50 left in the first quarter.

The offense’s outburst was more than enough for Crimson Tide’s defense, which held the Warhawks (1-2) to 169 yards, including 4-for-17 on third-down conversions. Alabama had four sacks and nine tackles for losses.

Malik Jackson’s 11-yard run pulled the Warhawks to within 28-7 with 10:11 left in the half before Young responded with a 15-yard touchdown pass to Amari Niblack with less than a minute remaining in the first half.

In the third quarter, Alabama extended its lead to 49-7 on Young’s 37-yard touchdown pass to Gibbs and Williams’ 10-yard scoring run.

Brian Branch returned a punt 68 yards to make it 56-7 with 12:36 left before Trey Sanders’ 6-yard run provided the final margin.

Chandler Rogers went 11-for-21 passing for 96 yards and an interception for the Warhawks, while Jackson rushed for 36 yards and a score on 13 carries.