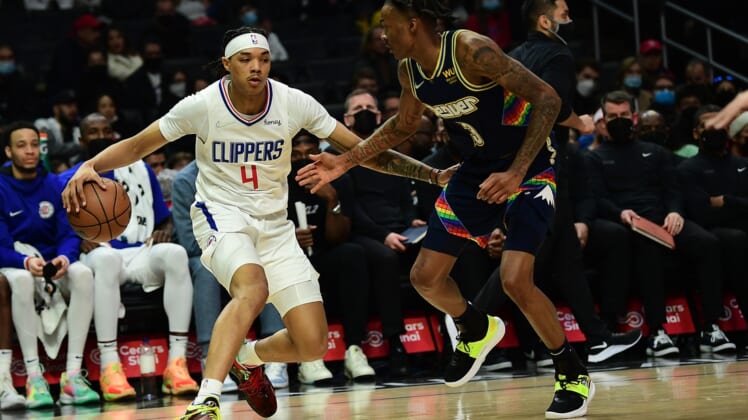 Nikola Jokic had 26 points, matched his career best of 22 rebounds and also contributed eight assists as the visiting Denver Nuggets rallied to beat the Los Angeles Clippers 103-100 on Sunday night.

Terance Mann had 11 points and eight rebounds and Serge Ibaka scored 10 for the Clippers.

The Nuggets missed their first two shots of the fourth and fell behind 86-79 before Rivers drained a 3-pointer to end the drought. Los Angeles increased its lead to 91-82 on Amir Coffey’s 3-pointer with 9:04 remaining but Denver found its offense.

Barton had a three-point play and a 12-foot jumper and Reed and Jokic hit buckets in an 11-2 run that tied it.

A Denver turnover led to a 3-pointer from Luke Kennard to make it 101-100 with 19.7 seconds left. Jokic hit two free throws with 12.7 left and Boston missed a 3-pointer just before the buzzer.

Denver led by two after the first quarter but the Nuggets built a lead in the second. Reed hit a 16-footer and a 3-pointer and Bones Hyland made two layups in a 9-0 run that gave Denver a 46-35 lead. The Clippers got within six on Bledsoe’s three-point play but Barton’s five points put the Nuggets ahead 64-55 at halftime.

Denver continued to add to the lead to start the third quarter, going up 74-57 with 7:45 left but Los Angeles rallied.

Down 79-66, the Clippers scored 17 straight points while the Nuggets went cold for the final 5:34 of the period. They missed their final 12 shots and ended the quarter with two straight turnovers. Los Angeles outscored Denver 28-15 in the period.