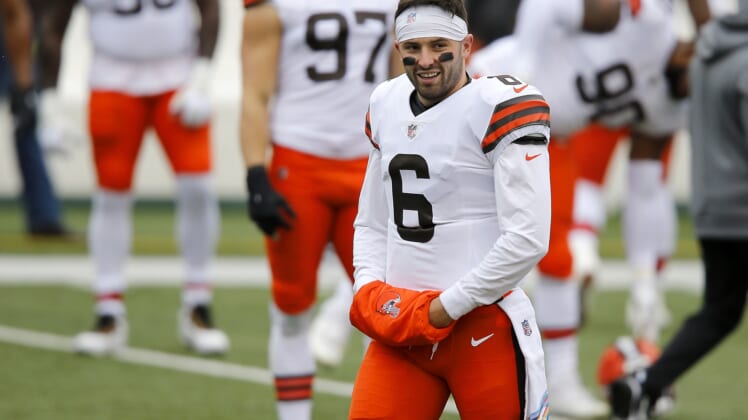 Embattled Cleveland Browns quarterback Baker Mayfield started Sunday’s game against the Cincinnati Bengals missing on each of his first five pass attempts with an interception.

It was just another example of Mayfield struggling big time during the early portion of his third NFL season. Once Odell Beckham Jr. went down with a knee injury early on, it looked like Cleveland would be in a world of trouble against an upstart Bengals squad.

This was magnified after stud Bengals rookie quarterback Joe Burrow led the team on a 10-play, 75-yard drive that culminated in a three-yard touchdown strike to Giovani Bernard. Cincinnati took a 34-30 lead with just over a minute left in the final stanza.

Like clockwork, Mayfield led his Browns to their own game-winning drive. It culminated in an absolutely shocking 24-yard touchdown strike to rookie Donovan Peoples-Jones with 11 seconds left.

By virtue of this touchdown strike, Cleveland moved to a surprising 5-2 on the season. For his part, Mayfield completed 22 of his final 23 passes for 297 yards with five touchdowns. That’s just ridiculous.

Obviously, the NFL world had its reactions to Mayfield leading his Browns to a comeback win.