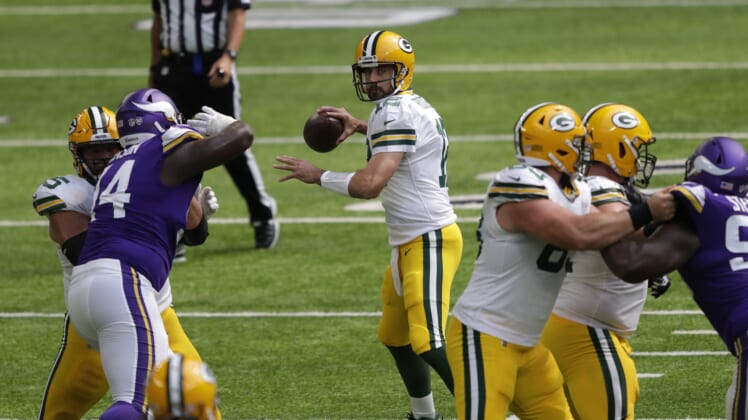 Green Bay Packers’ Aaron Rodgers (12) looks to pass in the first half against the Minnesota Vikings during their football game Sunday, September 13, 2020, at U.S. Bank Stadium in Minneapolis, Minn. Apc Packersvsvikings 0913200922

The new-look Minnesota Vikings defense faced a difficult initial test of the 2020 NFL season against the division-rival Green Bay Packers.

Pretty much from the start, this younger version of the Vikings’ defense did not live up to the billing. Despite some red-zone struggles early on Aaron Rodgers tore apart Minnesota’s secondary at every turn.

Green Bay held a 22-10 lead heading into halftime after dropping 19 points in the second quarter. The game was pretty much over from that point on.

Here’s a look at the winners and losers from Green Bay’s 43-34 victory over Minnesota in Week 1.

Rodgers felt as if his Packers were being underrated heading into the 2020 NFL season after losing in the NFC Championship Game this past January. If what we saw from the former MVP Sunday against the division rival Vikings is any indication, he might be on to something. Green Bay held a 22-10 halftime lead with Rodgers carving up Minnesota’s defense to the tune of 200-plus yards in the first two quarters.

It was pretty much easy sailing for Green Bay from that point on. Rodgers continued to find connections with star wide receiver Davante Adams throughout the afternoon. He would ultimately finish with 364 yards on 32-of-44 passing with four touchdowns and zero interceptions. After some struggles under head coach Matt LaFleur last season, it looks like Rodgers is back playing at an MVP level.

Fresh off signing a massive extension with Minnesota on Saturday, Cook was looking to continue the excellent play we saw from the former second-round pick last season. Some of it had to do with the Vikings playing from behind throughout the afternoon, but Cook did not perform at the level we’ve seen recently.

The Florida State product went for 50 yards on 12 attempts. He was pretty much a non-factor against a defensive line that was without star Kenny Clark in the second half. In no way is this the way the now high-priced Cook wanted to start his 2020 season. That’s for sure.

Just ridiculous. The Vikings had absolutely no shot covering Adams Sunday afternoon in Minneapolis. Whether it was Holton Hill or other young cornerbacks, Adams had his way throughout the game. We’re talking about a receiver who went for 156 yards while catching 14-of-17 targets, including this absurd touchdown.

As you can see, the game was pretty close at this point. Adams’ tremendous catch and score broke it open and led to a dominating second quarter performance from Green Bay after the Vikings held a 7-3 lead following the first 15 minutes. Yes, Adams is now a top-five receiver in the NFL.

Garbage-time numbers aside, Cousins was absolutely no match for Rodgers on Sunday. It’s not a great look given just how poorly the quarterback and his offense played the last time they took the field in last season’s NFC Playoffs. Cousins finished Week 1 having completed 19-of-25 passes for 259 yards with two touchdowns and an interception.

Those two scores — both to Adam Thielen- came with Minnesota trailing 29-10 in the final stanza. Prior to that, Cousins had tallied 84 net passing yards in more than three quarters. If the Vikes are going to have any chance to come out of the NFC, they’ll need Cousins to play like the high-priced quarterback that he is. We have not seen in that in Cousins’ two-plus years as the Vikings’ starter. It’s that simple.

A former first-round pick out of Louisville, Alexander has now stepped into the No. 1 corner role for Green Bay heading into his third season. The youngster had in the past struggled with giving up the big play while attempting to force turnovers. It now looks like Alexander has morphed into a more complete corner.

He was one of the primary reasons Green Bay held Cousins to less than 85 net passing yards through three quarters. That included two passes defended, a pass break up and a sack. This all-around ability in the defensive backfield could loom large moving forward with Za’Darius Smith and Preston Smith doing their thing in the front seven.