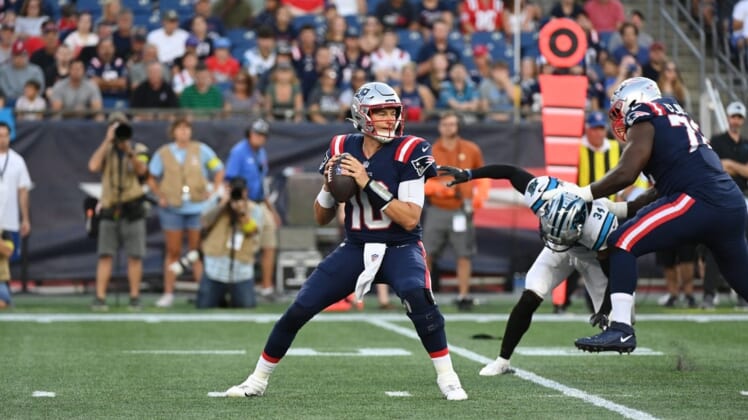 New England quarterback Mac Jones completed half of his eight passes for 61 yards as the Patriots beat the Carolina Panthers 20-10 on Friday in a preseason game at Foxborough, Mass.

Jones connected with Nelson Agholor for 45 yards on the second play of the second quarter. The completion set up Ty Montgomery’s 2-yard touchdown run that capped a 10-play, 81-yard drive. That was the last of the three series Jones played.

Lil’Jordan Humphrey paced the Patriots (1-1) with five catches for 71 yards.

Quarterback Matt Corral, a third-round draft pick of the Panthers (1-1), went 9 of 15 for 58 yards. Carolina’s top two quarterbacks, Baker Mayfield and Sam Darnold, did not play. The Panthers’ lone touchdown came on a 50-yard interception return from Tae Hayes.

With Aaron Rodgers sitting out, Love completed 12 of 24 passes for 113 yards and the one score for the Packers (1-1). Green Bay got a 51-yard scoring run from Danny Etling.

The Saints (0-2) did not use quarterbacks Jameis Winston and Andy Dalton, leaving Ian Book to play the whole game. Book matched Love’s 113 yards by going 16-for-28 with one touchdown and one interception.