While there were some indications on Monday night a trade between the New York Knicks and Utah Jazz for All-Star Donovan Mitchell could be dead, there are several reasons why a deal is still quite possible even with RJ Barrett no longer being available in a prospective swap.

The Knicks made headlines yesterday when ESPN first reported that the organization and representatives for Barrett were close to finalizing a long-term extension that could be worth as much as $120 million. Making the team’s rising star the youngest player in Knicks history to land a nine-figure extension.

With Barrett now being locked into a very expensive long-term deal, the assumption is that Jazz would have no interest in taking on that contract in a possible deal for Mitchell. And if a talented player with a lot of upside like the 22-year-old is no longer a part of trade discussions, it could severely hamper the value the Knicks can offer in a trade return.

While Barrett is a great trade chip to have, there is a lot of evidence that show’s his exclusion from a trade is not at all a deal breaker. Let’s take a look at why the Knicks and Jazz are still strong trade partners in a Mitchell deal even without Barrett.

RJ Barrett’s importance in a deal is overstated

Logically, the Jazz should want Barrett in any potential trade for Mitchell. Since he is arguably the Knicks’ best player right now, has perennial All-Star potential, and is only in his early 20s. However, there have been contrasting reports on the Jazz’s interest in him for the last month. As talks have played out between the two teams there have been rumblings that the Jazz doesn’t need Barrett in a deal for one very specific reason. That being the fact he was set to become a free agent after this season.

For the Knicks, signing the player they drafted with their top pick in 2019 makes sense. They have seen his progression and it is a worthwhile risk because they are heavily invested in his potential. However, there is no guarantee he will become a yearly All-Star. Accepting him in a trade would be just as risky for the Jazz as it is for the Knicks in giving him a $120 million contract. If he doesn’t continue to develop, the Jazz could pay an extension to a player not deserving of a nine-figure deal, or they let him walk and immediately make the trade for Mitchell that much less of a winning decision.

While getting Barrett would be a good return for the Jazz, his impending free agency added the type of risk the organization would rather avoid this early in a long-term rebuild.

New York Knicks still have what the Jazz want

Utah certainly would like some talented players than can help them now in any prospective deal, but every single report on what the Jazz want in a trade for Mitchell is a whole bunch of first-round draft picks. Following the news of Barrett’s extension, the New York Post’s Marc Berman revealed the current sticking point in a swap is not the lack of Barrett, but the amount of unprotected first-round picks New York is willing to give up.

The Jazz reportedly wants four unprotected picks but the Knicks don’t want to part with more than two. The Knicks still have the most first-round picks of any team in the league in upcoming drafts. They have the expendable assets to give the Jazz what they really want when it comes to draft capital. Other teams do not, and it still gives New York a lot of leverage. 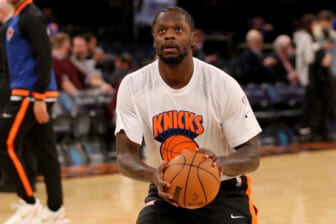 Knicks have a bunch of other worthwhile assets

As mentioned above, New York has a ridiculous amount of first-round selections in upcoming years, along with a bunch of second-round picks as well. However, beyond that, the organization still has a lot of strong young players on the roster who are still under team control longer than Barrett. Obi Toppin, Immanuel Quickly, Quentin Grimes, and Cam Reddish are all players that have value to a rebuilding team like the Jazz.

Toppin and Grimes most notably are former first-round picks that have the talent to become building blocks in Utah’s future, because they will be given the playing time they have not received in New York. Since they are blocked by established veterans with big contracts on the current Knicks roster.