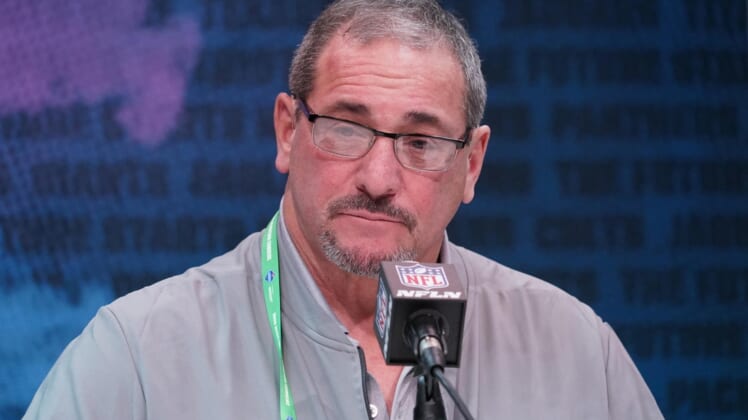 New York Giants general manager Dave Gettleman said Thursday he’s “comfortable” with only having six picks in next week’s NFL draft but added he wouldn’t rule out trading down to get more.

It’s just that Gettleman has never traded back in his eight years as GM for the Carolina Panthers and now Giants.

The Giants own the No. 11 overall pick.

A deal that has never been consummated by Gettleman. Of his 54 career picks made as a general manager, he’s traded up a few times but never back. One NFL Network analyst joked NASCAR will have right turns before Gettleman trades back.

“Hell of a line, had a good laugh, Gettleman said. “I’ve tried in the past. Honest, I’ve tried to trade back, but it’s got to be value. I’m not getting fleeced. I refuse to do it. If somebody wants to make a bad trade back, God bless them. But we’ve had opportunities, I’ve tried.

“It’s almost becoming an urban myth. I’ve tried,” he added. “My concern is the New York Football Giants, that’s what I’m concerned about.”

Gettleman added he hopes “10 quarterbacks go in front of us” so that the Giants get dibs on a player who can make an impact right away.

“It’s really hard to take a guy at 11 that you’re betting on the potential,” Gettlemen said. “In the NFL, I’ve got to be really cognizant of the coaches. They’re under the pressure to win all the time. Every Sunday is a referendum on their skills as coaches, and you’ve got to be really careful when you start taking guys that high that you love the physical skills and the potential, but how long is it going to take for it to show on the field?”