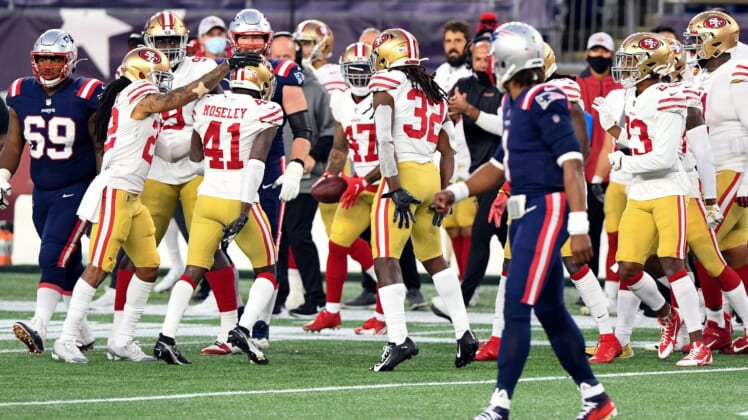 New England Patriots quarterback Cam Newton started the season out strong with a Week 1 win over the Miami Dolphins. Unfortunately for the former NFL MVP, a battle with COVID-19 halted his season in its tracks.

Making his second appearance since returning from the virus, Newton was absolutely terrible during Sunday’s game against the San Francisco 49ers. He threw three interceptions in just over three quarters before getting the hook.

This is obviously a less-than-ideal scenario for the Patriots. They were down 33-6 early in the third quarter and being outgained, 440-140, when Newton was pulled from the game.

He’s now thrown zero touchdowns and five interceptions in two outings since returning from COVID-19. While we’re not going to correlate his battle with the virus with on-field struggles, it might suggest something is up.

Jarrett Stidham replaced Newton under center late Sunday evening in New England. Veteran Brian Hoyer is another option. They’ve both seen action this season. And it has not gone swimmingly.

Stidham ultimately threw an interception on his first possession replacing Newton under center. All said this season, Patriots quarterbacks have combined for three passing touchdowns and 11 interceptions.

Someone ask Bill Belichick whether he misses a man by the name of Tom Brady.

As for the Patriots, they are now 2-4 on the season. That’s the first time they’ve had such a bad mark since all the way back in 2000, Belichick’s first season as the Patriots’ head coach. Coincidentally, that was also Brady’s rookie season.

Something is broken in New England right now. Unfortunately, it doesn’t look like Newton is going to be the man to fix it. We’ll see what happens Week 8 against the Buffalo Bills in a game the Patriots need in order to even remain remotely alive in the AFC East race. Right now, it’s not looking great.