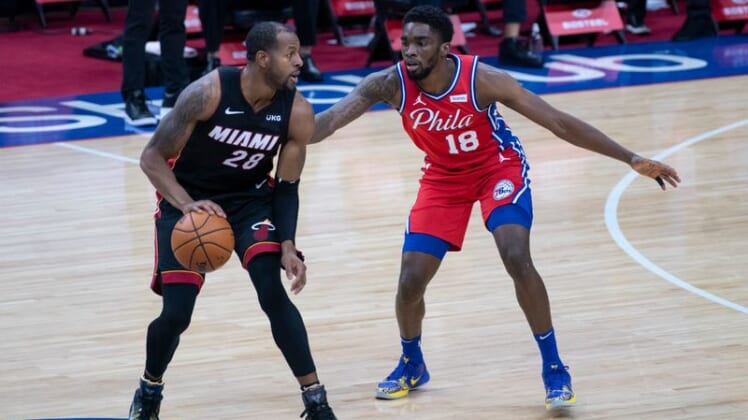 Philadelphia’s Ben Simmons posted his 30th career triple-double with 10 points, 10 rebounds and 12 assists. Simmons reached the milestone in just his 228th career game, as he became the third-fastest in NBA history — behind Oscar Robertson (75 games) and Magic Johnson (190) — to hit the mark.

Tyrese Maxey contributed 15 points and Danny Green and Isaiah Joe had 12 apiece for the Sixers, who also topped the Heat two nights earlier. The Sixers received a big boost with the return of Milton, Harris and Matisse Thybulle (eight points, four steals) from COVID-19 contact tracing.

Duncan Robinson led the Heat with 22 points, Gabe Vincent added 21 and Tyler Herro had 17. Precious Achiuwa had 10 points and 11 rebounds for his second straight double-double.

Malcolm Brogdon and Domantas Sabonis combined for 48 points and Indiana used a 33-10 blitz in the second quarter to take command en route to a victory at Portland.

Of greater concern for the Trail Blazers, though, was center Jusuf Nurkic breaking his right wrist. He exited in the third quarter after he fell, and he didn’t come back into the game.

Brogdon logged a game-high 25 points and Sabonis complemented him with 23 as the Pacers, short-handed after trading Victor Oladipo to the Houston Rockets, won a second straight on the road. Damian Lillard and CJ McCollum had 22 points apiece for Portland, which had won four in a row but was playing the second night of a back-to-back set.

Reserve Chris Boucher matched his career best with 25 points and added 10 rebounds as Toronto held off Charlotte at its temporary home at Tampa, Fla.

Kyle Lowry added 16 points and 12 assists as the Raptors won for the third time in 11 games this season. Fred VanVleet had 17 points for Toronto and Pascal Siakam added 15.

Christian Wood racked up 27 points and grabbed 15 rebounds to lead short-handed Houston to a surprising win at San Antonio.

The game was Houston’s first since it shipped star guard James Harden to the Brooklyn Nets as part of a four-team trade that was finalized Thursday morning.