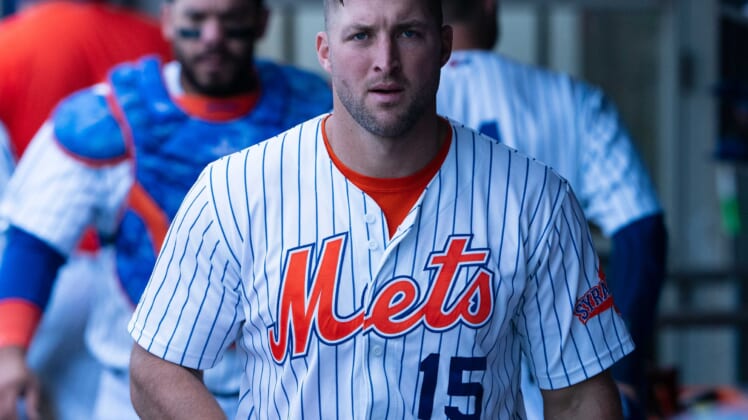 We’re one-fourth of the way through the 2019 MLB season. The first quarter supplied plenty of noteworthy happenings and left us wondering what will happen next.

A number of the game’s top prospects have already been called up. We’re expecting another big name Minor Leaguer to make his MLB debut. Two decades ago, Sammy Sosa did something that hadn’t happened before and hasn’t happened since. We’re expecting that to fall. Look for some big names to be moved before the All-Star Break. Finally, the extended free agency periods of Craig Kimbrel and Dallas Keuchel should finally come to an end.

These are among the bold predictions to look forward to prior to the All-Star Break.

All stats and records are accurate through play on Thursday, May 16.

Tebow has struggled mightily in Triple-A Syracuse. To that end, the New York Mets should be looking for a way to end this experiment. That doesn’t mean that Tebow’s time in baseball experiment is over. Quite the opposite. In fact, the Miami Marlins trading for and promoting Tebow would even make sense. Miami struggles to draw fans. If nothing else, Tebow is a draw. The Marlins are 10-31 and actually overachieving. It’s not like he’d be torpedoing a potential pennant winner.

The San Francisco Giants ace lingers as one of MLB’s biggest potential trade chips. It makes sense. He’s a pending free agent, San Francisco isn’t contending and a number of good teams can use someone with his resume. Here’s the problem. The Giants don’t want to trade a franchise icon. If they did, it would have happened last season or during the offseason. If San Francisco trades Bumgarner, it will be right before the deadline. But don’t expect it to get that far. Instead, the Giants will extend their longtime ace.

Even with six straight NL West titles, the Los Angeles Dodgers still haven’t won a World Series since 1988. A consistent postseason downfall has been the bullpen. Kimbrel has been baseball’s best reliever for the last decade. Fortunately for Los Angeles, he’s available in free agency. Kimbrel won’t be ready to go immediately. The team that signs him needs to be one with enough leeway in the standings to wait on him to be ready. The Dodgers definitely qualify.

It hasn’t taken long for Guerrero to show why he was MLB’s best prospect entering year. He’s consistently hit. More recently, he’s found his power stroke. That’s great for the Jays. For their opponents, not so much. In addition to having 23 home games at the hitter friendly Rogers Centre before the break, Toronto has road games in live yards like Chicago, Colorado, Baltimore, Houston, Boston, and New York. Guerrero can hit it out of any park. But those places will make it even easier. That will help the star rookie have a huge power surge before the break.

The Washington Nationals have the second worst record in the NL, ahead of only the Miami Marlins. Whether that’s all Martinez’s fault is a matter of debate. But this team was built to compete for a World Series or at least go to the playoffs (like it did in 2012, 2014, 2016, and 2017). Instead, the Nats missed the playoffs in 2018 and are 18-25 in 2019. General manager Mike Rizzo has used managers with better track records than that as scapegoats in the past. Doing the same with Martinez is well within the realm of possibility.

Red Sox trade for Will Smith

The Boston Red Sox had a near perfect season in 2018. But one notable flaw was the bullpen. In 2019, that flaw has reared its ugly head again. Smith can go a long way in helping that. He’s posted a 2.70 ERA, 0.840 WHIP, and a 10.8 K/9 rate. Smith is a lefty who can get right-handed bats out and can close (as his 11 saves will attest). Unlike Bumgarner, Smith will assuredly be traded this year. Boston waiting until late-July will only increase the likelihood of another team landing Smith. Don’t expect the Red Sox to wait.

While they have a decent record, the Cleveland Indians had been outscored on the season until Thursday’s win over the woeful Baltimore Orioles. That doesn’t bode well for them staying in the race against the Minnesota Twins, who have been one of baseball’s best teams by virtually any metric. As we move closer to the All-Star Break, expect that lead to get even bigger. While they reportedly tried, the Indians didn’t trade Corey Kluber and Trevor Bauer in the offseason. As we get closer to the deadline, the standings should present Cleveland with a natural chance to try again.

The Tampa Bay Rays use the opener quite well. Unfortunately, that can put a lot of strain on the bullpen. Adding a starter would go a long way towards easing that burden. That’s where Keuchel comes in. He’d likely be used as a true starter. But even as a bulk reliever Keuchel can absorb a lot of innings. He’s also playoff tested. That’s pretty valuable for any team. Especially one who hasn’t made the playoffs in six years. Tampa’s had some good luck with Charlie Morton. Bringing in another former Houston Astros starter would be quite sensible.

The Atlanta Braves have had an inconsistent season in 2019. A big reason is that aside from Mike Soroka, the starting pitching has been shaky. Landing Stroman would help change that. He has an 2.95 ERA and 1.293 WHIP. Even better is that the Toronto Blue Jays are shopping him. Toronto is looking to add more young talent like Vladimir Guerrero Jr., Bo Bichette, and Cavan Biggio. Atlanta is loaded with young MLB talent and stud prospects. Given that two teams play in different leagues, we’d call the Braves and Blue Jays pretty natural trade partners.

In June, 1998, Sammy Sosa announced his presence in that year’s home run race by hitting 20 home runs. It was (and still is) a record for home runs in any month. Don’t expect it last much longer. While Bellinger has always had immense power, his swing has always had holes. That gave pitchers a chance against him. But those holes are largely closed. The Dodgers have only two off days in June. Their schedule that month includes two series in Arizona and a four-gamer in Colorado. As locked in as Bellinger has been, Sosa’s record is in serious jeopardy.