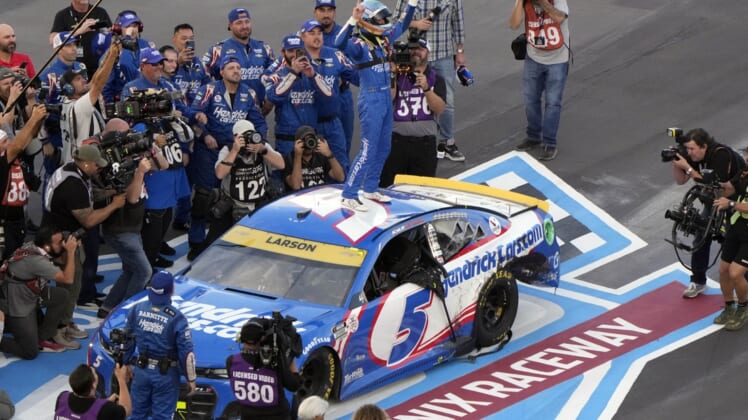 Larson won Sunday’s NASCAR Cup Series Championship at Phoenix Raceway and the season title that went along with that victory.

The victory was the Hendrick Motorsports driver’s 10th of the season and handed him his first Cup championship. It came in his first career Championship 4 race.

In getting the victory, Larson led a race-best 107 laps.

Finishing second in the race and the championship was Martin Truex, Jr. of Joe Gibbs Racing.

Truex, who won the 2017 championship, finished .398 seconds behind.

Third in the race and championship was Truex’s teammate, Denny Hamlin, who was looking for his first Cup championship.

Fifth in the race and fourth in the championship was 2020 champion Chase Elliott of the Hendrick team.

Ryan Blaney of Team Penske, not a member of the Championship 4, finished fourth.

The winning move for Larson may have come on Saturday when he won the pole and the No. 1 pit stall that came with it. He was running fourth when, with 30 laps to go, a caution flag waved. When the cars returned to the track from the pits, Larson had the lead.

From there, he held off Truex, who was cutting into the lead over the final laps.

For the first seven seasons in the Cup Series, Larson was a mid-level competitor, winning just six races during that time.

Then, four races into the 2020 season, the California native was fired by the Chip Ganassi Racing team for which he had driven all those years, after he uttered a racist slur into an open microphone during a televised iRacing event.

Team owner Rick Hendrick, however, took a chance on Larson and the result has been stunning. In addition to the double-digit wins, Larson piled up 20 top-five and 26 top-10 finishes.

Elliott, 25, was looking to become the youngest driver to win back-to-back Cup championships and the 11th driver overall to do it. The last driver to win two or more titles in a row was Jimmie Johnson, who won five in a row between 2006 and 2010.