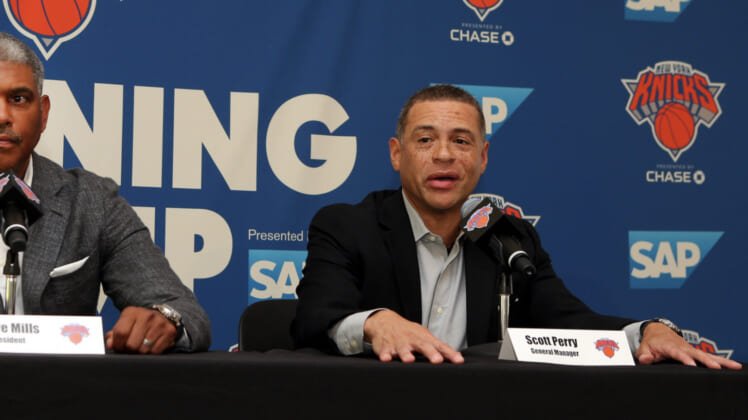 The New York Knicks had hoped that they’d land the No. 1 overall pick and Duke star Zion Williamson in the 2019 NBA Draft.

The balls literally did not bounce in their direction during the lottery Tuesday evening. Instead, New York will be selecting third overall in next month’s draft.

Whether this changes the Knicks’ approach remains to be seen. But listening to president Steve Mills during the NBA Scouting Combine Friday, it doesn’t seem like the Knicks are going to be trading that third pick.

This is somewhat interesting. It’s a guarantee that Williamson will go off the board to the New Orleans Pelicans at one. Selecting No. 2 overall, the Memphis Grizzlies are honing in on Ja Morant.

These are considered the consensus top two players in the draft. Though, New York is apparently high on former Duke standout R.J. Barrett.

The larger question here is New York’s plans in free agency come July. Linked to both Kevin Durant and Kyrie Irving, adding a top-end player would almost certainly require moving the third pick for another veteran.

One of the biggest draws for these Knicks ahead of the lottery was the possibility of picking up Williamson. Now that this has been thrown out the window, it’s pretty much an open question what New York will do with the third selection.

Despite Mills’ words, don’t be surprised if the Knicks do in fact trade their third pick for a star veteran as a way to entice either Durant and/or Irving.