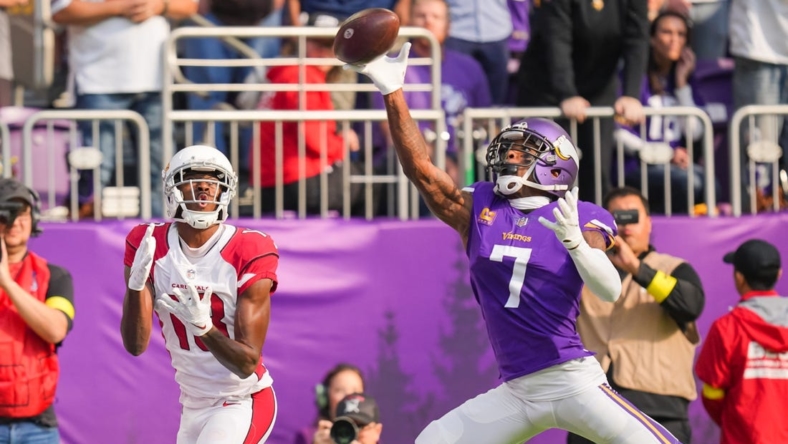 Kirk Cousins accounted for three total touchdowns as the Minnesota Vikings hung on for a 34-26 victory over the Arizona Cardinals on Sunday in Minneapolis.

The Vikings (6-1) won by eight points or fewer for the fifth straight game. Counting regular season and playoffs, the win was also Minnesota’s 11th straight at home against the Cardinals (3-5), a streak that began in 1991.

The Cardinals took a brief 17-14 lead in the third quarter on an 8-yard pass from Kyler Murray to tight end Zach Ertz. However, the Vikings responded with touchdowns by Mattison and Cook, the latter after the first of two Murray interceptions, to take a 28-17 lead.

Arizona cut the lead to 28-26 on a 38-yard pass to wide receiver Rondale Moore and a 34-yard field goal by Matt Prater. But the Vikings scored the final points of the game after Greg Dortch muffed a Minnesota punt and the Vikings recovered at the Cardinals’ 25-yard line.

Murray completed 31 of 44 passes for 326 yards and three touchdowns but was intercepted twice. In his second game back from a league suspension, wide receiver DeAndre Hopkins had 12 receptions on 13 targets for 159 yards and one touchdown.

The Vikings built a 14-3 lead in the first half on two long touchdown drives of 75 and 83 yards. Cousins ran for a 17-yard score on a third-and-4 play with 10:12 left in the first quarter. Then he hit tight end Johnny Mundt for a 1-yard touchdown with 9:54 remaining in the second quarter.

Prater, kicking for the first time since Week 4 due to injury, hit a 44-yard field goal for the Cardinals in the first quarter. Trailing 14-3, the Cardinals cut the lead to 14-10 with 47 seconds remaining in the half on a miraculous one-handed catch by Hopkins from Murray for 6 yards. Hopkins had receptions for 16 and 13 yards earlier in the 72-yard drive.