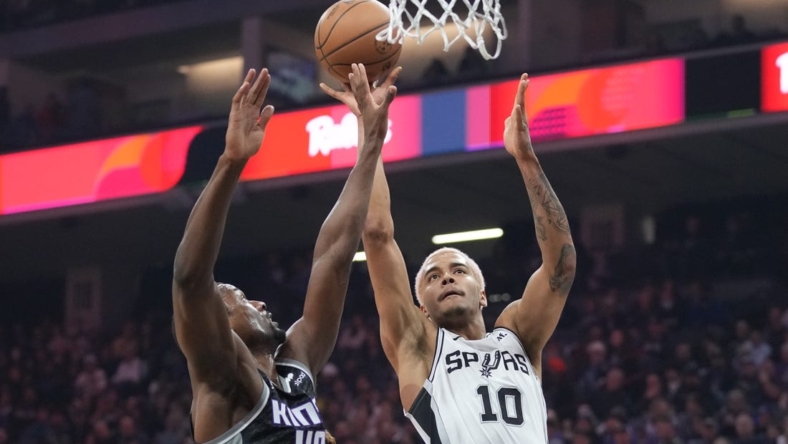 De’Aaron Fox scored a team-high 28 points, Malik Monk chipped in with 26 — including two key 3-pointers in a run that bridged the third and fourth quarters — and the Sacramento Kings made it five wins in a row Thursday night with a 130-112 victory over the visiting San Antonio Spurs.

Domantas Sabonis and Harrison Barnes contributed 16 points apiece as the Kings have scored at least 120 points in all five games in the streak.

Devin Vassell went for a game-high 29 points for the Spurs, who lost their third straight to open a five-game trip.

After rallying from as many as 16 points down to forge three ties late in the third quarter, the Spurs watched as the Kings regained command by scoring the period’s final seven points. Fox had two hoops to begin the pull-away, and when Monk hit a 3-pointer with 3.9 seconds left in the quarter, all of a sudden Sacramento was back up by seven at 89-82.

The run didn’t stop there. Trey Lyles made it an eight-point game with a free throw before Monk connected again from deep, creating a double-digit advantage in the first minute of the fourth period.

San Antonio never got closer than 10 after that.

Fox hit 11 of his 15 shots and Monk 11 of his 19, helping the Kings shoot 57.8 percent from the field. Fox also found time for a game-high eight assists, while Sabonis and Barnes shared game-high rebound honors with eight.

Lyles (14) and Chimezie Metu (10) also scored in double figures for the Kings, who improved to 8-6 after starting the season 0-4.

Vassell shot 11-for-19 for the Spurs, who lost despite connecting on 54.8 percent of their shots.

Coming off a 153-121 shellacking of the Brooklyn Nets two days earlier, the Kings never trailed. They grabbed a 10-point lead in the first 3-plus minutes when Fox and Barnes nailed 3-pointers in a game-opening 12-2 flurry.