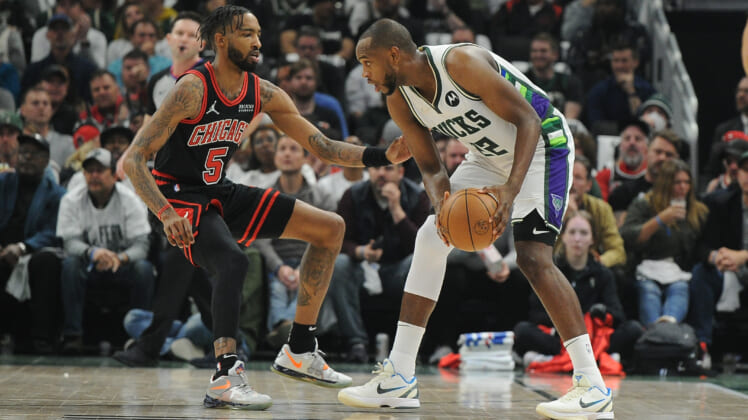 Update: Khris Middleton diagnosed with sprained MCL. It’s being reported that he’s expected to miss 3-4 weeks. This is just a brutal blow for the defending champion Bucks.

Khris Middleton and the Milwaukee Bucks were not having a good time at home Wednesday night in Game 2 of their first-round NBA Playoff series against the Chicago Bulls.

Milwaukee trailed throughout pretty much the entire game as the team looked to move to 2-0 in the series. In the end, the Bucks fell by the score of 114-110.

Unfortunately, there’s another backdrop to this. Middleton sufferd an apparent leg injury after slipping on the court in the fourth quarter. The All-Star immediately headed for the locker room and looked to be in some pain.

The Bucks noted immediately after the injury that Khris Middleton would not return to the game due to left knee soreness.

Prior to exiting, Middleton had scored 18 points on 6-of-11 shooting, including a 5-of-7 mark from three-point range. This came after he scored 11 points on just 4-of-13 shooting in Milwaukee’s Game 1 win over Chicago.

Related: Khris Middleton and the NBA’s top-50 players of 2022

We have no idea what the extent of the injury Middleton suffered outside of the Bucks’ press release. He’s almost certainly going to get an MRI ahead of Game 3 Friday in Chicago. Pending the results of said MRI, there’s a chance he’ll miss some time.

A second-round pick of the Detroit Pistons back in 2012, Middleton was dealt to Milwaukee ahead of his sophomore season in 2013. He’s since morphed into one of the most-underrated players in the NBA.

Middleton has acted the part of a No. 2 scoring option behind Giannis Antetokounmpo in Milwaukee during this span. An extended absence would impact the Bucks big time.

That’s magnified by their Game 2 home loss to the Bulls. Following said loss, Milwaukee has given up home-court advantage in the series with two consecutive games slated to be played in Chicago.

In addition to relying on Giannis to score even more, the Bucks will ask for Jrue Holiday to step it up if Middleton is forced to miss time.