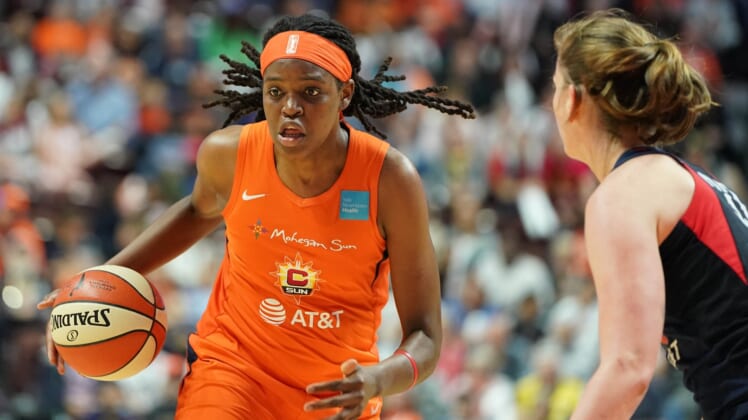 For the fourth week in a row, a player from the Connecticut Sun and the Phoenix Mercury have each had a player be named WNBA Player of the Week with the award going to Jonquel Jones of the Sun and Brittney Griner of the Mercury.

This is the third time in the past four weeks of this season that both Jones and Griner were each named Player of the Week at the same time. Jones has now been selected four times. This represents Griner’s third selection.

Jones continues to state her claim for the WNBA MVP award, ranking fourth in the WNBA this season in points per game (20.3), leading in rebounding (11.0) and is second in double-doubles (14).

As the Connecticut Sun head down the back stretch of the season, they currently sit at the top of the standings with a 21-6 record on a nine-game win streak. With five games remaining, the Sun are 1.5 games ahead of the Las Vegas Aces for the top spot.

Griner played in two games last week averaging 20 points and five rebounds leading the Mercury to victories in both outings. She has made a case of her own for the WNBA MVP ranking third in scoring (20.7), seventh in rebounds (9.4) and leading in blocks (2.0).

This was not the only honor bestowed upon Brittney Griner this past week as she was selected as one of the WNBA’s 25 Greatest Players in History as part of the league’s 25th anniversary celebration.

The Mercury have a 17-10 record including wins in their last eight games currently holding the fifth seed in the WNBA standings. They are one game back of the Minnesota Lynx for the fourth seed which is significant as that is the final first-round bye spot in the playoffs.