Jo Adell was once one of the top prospects in MLB and a featured part of the Los Angeles Angels’ future. Adell was going to share the outfield grass with Mike Trout and prosper. That hasn’t quite happened.

Adell has struggled to hit his weight and play the field at the MLB level. To boot, the outfielder has infrequently been on the Angels’ roster since 2020. At the same time, Adell still brings intrigue to the table. He can play all three outfield positions, raked in the minor-league ranks and is still just 23.

Here are three ideal trade destinations for Adell, who badly needs a change of scenery.

The Padres are bouncing back from a disappointing 2021 campaign, but their outfield shortcomings drag on. Adell provides a much-needed new outfielder to the mix.

Wil Myers and Matt Beaty are nursing injuries. Trent Grisham is hitting .179. Jurickson Profar has been a pleasant surprise at the plate but is also adept at playing various positions. Adell gives the Padres more depth and someone with a chip on his shoulder.

With San Diego, Adell will have to fend off their established outfielders, especially when the team is at full strength. Maybe competition at the MLB level (he’ll be on their active roster from the jump) helps get Adell in a groove at the plate? If and when he justifies being in the starting lineup, Adell will be in a high-octane offense where he’ll have ample opportunities to drive in runs.

All that said, the Padres may prefer to see what Robert Hassell III can do at the big-league level and/or acquire a more proven outfielder for depth.

2. Jo Adell to the Texas Rangers

The Rangers are somehow 26-30 despite having an anemic offense and hit-and-miss starting rotation. Concerning their offense, Texas’ outfield has left much to be desired. Adell would be a savvy acquisition.

The Rangers have a lot of youngsters/players in the raw stages of their MLB careers in their outfield rotation such as Adolis Garcia, Eli White and Nick Solak. Adell adds to that youth and creates more competition for the aforementioned players, and vice versa.

The Rangers have a plethora of compelling young pitchers and their infield is set for the foreseeable future (Texas signed Corey Seager and Marcus Semien with the likes of Nathaniel Lowe and Josh Smith also in the mix). While their infield corps surely has to play better, the Rangers also need more production from their outfield. The more, the merrier in the outfield grass. Adell’s growth will have a direct impact on the Rangers in both the short and long term.

The factor that could stop the Rangers from acquiring Adell, though, is them preferring to lie low on the trade market after a vibrant offseason.

1. Jo Adell to the Washington Nationals

The Nationals need players to build around. While a former top prospect trying to find himself isn’t going to imminently solve that problem, Adell is a worthwhile investment for Washington.

Juan Soto is one of the elite hitters in the sport but also the only firm fixture in the Nationals’ outfield. Victor Robles, Lane Thomas and Yadiel Hernandez have had their moments but haven’t done enough to prove that they’re everyday players on a competitive team. 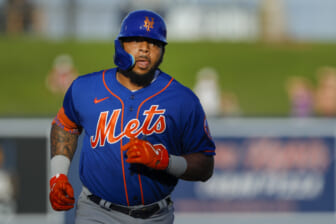 Adell could be a day one starter for the Nationals. He can start in either left or center field, giving manager Dave Martinez another young bat. Washington’s entire starting infield is a free agent after this season. They could use MLB-level players under contract for the foreseeable future.

The Nationals have a plethora of former and currently touted young pitchers in their system. They have some pieces around the diamond but not enough to make for a firing offensive attack. Adell and the Nationals need each other. The former needs a new team to take a chance on him, and the latter needs position players with upside to start the rest of the 2022 MLB season.