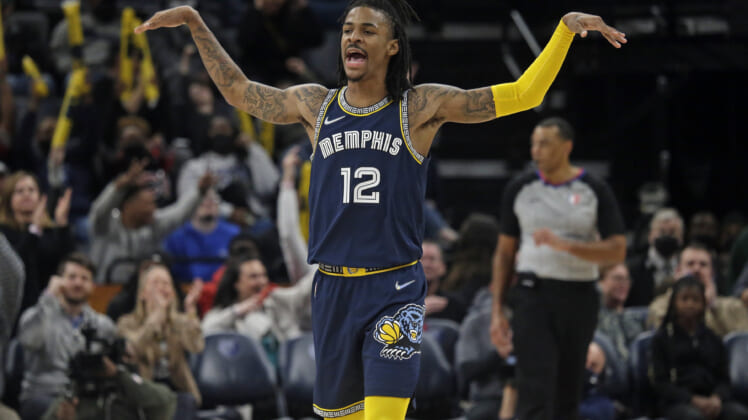 In his third year in the league, the 22-year-old Morant has taken another leap forward in his progression and has become an NBA-wide sensation. He’s led the Memphis Grizzlies to the third-best record in the league and is a legitimate MVP candidate in 2021-2022.

Not only is Morant blooming into the face of the franchise for Memphis, but he is quickly turning into one of the most popular talents in the entire league. On Feb. 28, Morant scored a career-high 52 points in a 118-105 win over the Spurs. It was a showcase of his various talents as he generated several highlight-reel moments in decimating the visiting team.

Not only did Morant set a record for his team by being the first 50 point scorer in franchise history, but he also set the NBA social media accounts ablaze with his memorable performance. According to the NBA’s public relations department, Morant’s outstanding night against the Spurs generated more than 80 million views across the league’s various social platforms.

This just adds to Morant’s growing legend after he had a viral video from earlier this year when he slammed home an alley-oop dunk, off a full-court inbound pass from Steve Adams. Which became the most viewed video all-time on the NBA’s Instagram account.

Although Morant is quickly becoming one of the NBA’s most adored talents, when it comes to the overall pecking order of views he is just third with 385 million views. Next is Lebron James at 402 million, and well above both of them is the shooting machine known as Steph Curry with 674 million views on the league’s social platforms (via Alex Kennedy).

Morant and his Grizzlies return to the court on the NBA games today schedule to face Jason Tatum and the Boston Celtics on the road.