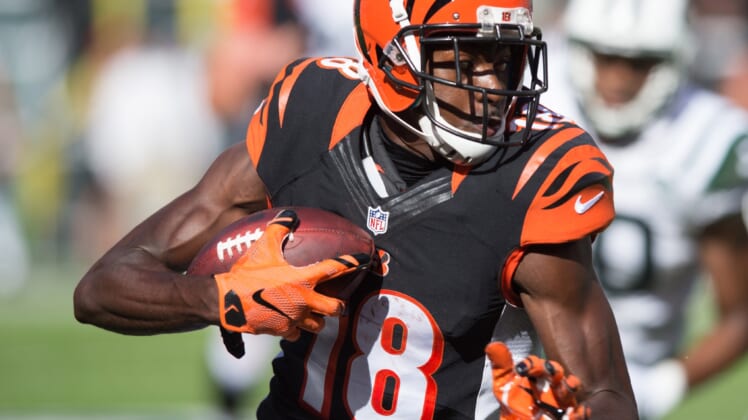 As many are aware, Mixon came into the 2017 NFL Draft with some red flags in regards to the way he has violently attacked women on at least one occasion. There was a lot of controversy surrounding the former Oklahoma running back. This scribe has opined that the Bengals were the worst team to have drafted him, given their history of taking on troubled players.

With that in mind, here’s what Green had to say about his new teammate.

“I’m a God-fearing guy and I feel like everybody deserves a second chance,” said Green, via Richard Skinner of WKRC 12 in Cincinnati. “I don’t condone what he’s done. He can’t take that back. I know he would like to. I feel like the Christian man in me, with my faith, that’s the Christian way to do. I’m going to give the guy a chance. You don’t look upon somebody, you help them. I feel like bringing him into the locker room with Andy (Dalton) and I being the leaders of the offense will really help him.”

Hopefully Mixon can learn from Green, Dalton and the rest of the leaders in Cincinnati’s locker room not named Adam Jones. Hopefully his past bad deeds are truly behind him and he can walk into the future with dignity, pride and respect for the women around him.

Clearly, Mixon has the ability to become a potential superstar in the NFL. He racked up 2,921 yards and 26 touchdowns the past two seasons for the Sooners. Green is excited about adding him to Cincinnati’s offense, calling him “probably the best complete back in this draft.”

“No question about his ability. I said from day one when I was watching Oklahoma play this past season, he’s probably the best complete back in this draft. He’s a good guy for our offense. That’s another competition out there. It’s going to heighten the competing level in the running back room with Jeremy (Hill) in the last year of his contract. So I’m pretty sure he has a big chip on his shoulder to play good. And I think he’s going to play terrific for us. We’ve got Gio (Bernard) coming back. We know what he can do. And we’ll go from there.”

Many will be following Mixon’s career for more reasons than just football. He has a lot to prove. But thankfully he is walking into a situation where leaders like Green will give him the second chance he needs to have a productive career on the field and become a respectable man off it.