Is Jalen Hurts the biggest sleeper in the 2020 NFL Draft? 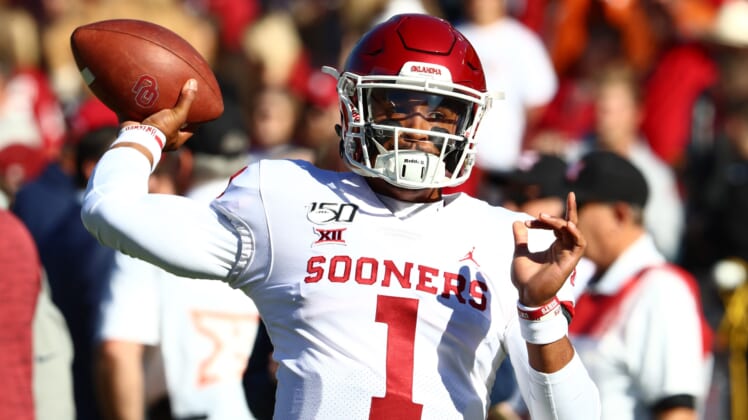 Jalen Hurts might just be the biggest sleeper in the 2020 NFL Draft.

The skinny: Hurts led College Football Playoff teams at both Alabama and Oklahoma and put up jaw-dropping stats along the way. Yet, he is not mentioned as a top quarterback in the 2020 NFL Draft.

The player: Hurts burst onto the national scene as a true freshman, putting up a historic season in 2016. From there, he continued to lead winning teams and was among the most dangerous playmakers in college football, four years running.

Hurts threw just 20 interceptions in 56 games and displayed impressive decision-making throughout his time in college. He’s been accurate throughout his four-year collegiate career (65.1%). He also has the type of electric dual-threat abilities that are becoming more common in the NFL as more teams lean into the spread offense.

The one alarming thing was that he fumbled the ball 25 times and lost 14 fumbles during his four years in college.

The narrative: Overwhelmingly, Hurts is viewed as a tremendous college quarterback who will probably not be able to replicate that success in the NFL.

Consider this damning quote from ESPN’s Todd McShay: “I see Hurts as a Day 3 prospect right now, and a few people I’ve talked to around the league agree. Actually, I think the third round could be his ceiling.”

The competition: The guys who are being talked about as first-round quarterbacks are all splendid prospects with outstanding potential.

Big boards across the nation have these six quarterbacks sitting higher in the rankings than Hurts.

That may be a mistake. Here’s why.

The X-factor: When looking for a young man to lead your franchise, talent isn’t the end-all, be-all. You have to find a kid with outstanding character, leadership qualities and a level of focus that’s uncommon in the general population.

Hurts has these qualities, and then some.

Hurts has the “it” teams need.

Who could possibly forget about his SEC Championship Game performance following the 2018 season against Georgia? Taking over for an injured Tagovailoa, Hurts led an incredible comeback win to improve to 13-0 and secure a spot in the playoff.

Even now, Tagovailoa is standing out among his peers as they prepare for the 2020 NFL Draft.

The bottom line: Sleep on Hurts as a potential NFL superstar at your own risk. He’s a fiery competitor who has succeeded at the highest level of competition during his college days. And he’s absolutely determined to be a quarterback at the next level.

If this kid ends up falling into the bottom half of the 2020 NFL Draft, all it’s going to do is make the gigantic chip on his shoulder double in size.

When it’s all said and done, some team is going to land an incredible bargain, if not the steal of the decade.