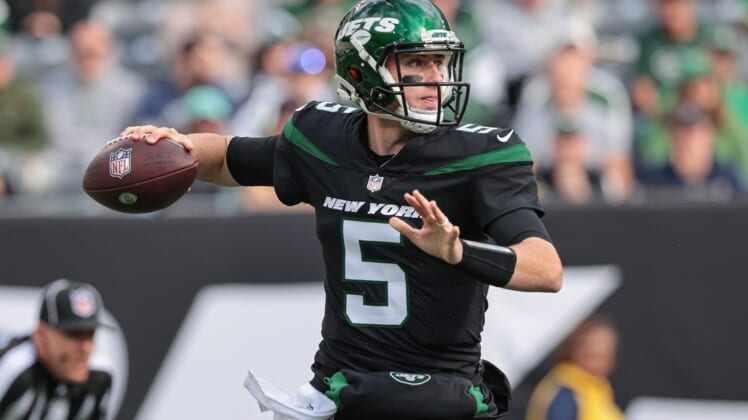 Shaq Lawson gave the Jets their first interception of the season and Mike White outdueled Joe Burrow as New York rallied late to pull a 34-31 upset over the visiting Cincinnati Bengals in East Rutherford, N.J.

Lawson deflected a screen pass and caught the carom for the interception with 4:32 to go. Two plays later, White hit Tyler Kroft with a 13-yard, go-head touchdown. White caught the 2-point conversion pass from Jamison Crowder on a trick play and the Jets led 34-31 with 3:50 left.

Cincinnati (5-3) punted from its own 40 with 2:19 remaining and never got the ball back after a third-down personal foul penalty extended the Jets’ last possession.

The Jets (2-5) snapped a two-game skid and won for the first time in the last four meetings against Cincinnati.

White, in his first NFL start, completed 37 of 45 passes for 405 yards and three touchdowns with two interceptions. Michael Carter added 172 yards from scrimmage on 24 total touches with a touchdown.

Burrow completed 21 of 34 for 259 yards with three touchdowns and one interception. He’s the only QB in the NFL to throw multiple touchdowns in every game this season. Joe Mixon scored twice and gained 91 yards from scrimmage on 18 touches. Tee Higgins led all receivers with 97 yards on four catches.

The Bengals snapped a 17-17 tie late in the third quarter when Burrow found Mixon with an 8-yard touchdown pass out of the backfield. Matt Ammendola answered for the Jets with a 24-yard field goal that trimmed the deficit to 24-20 with 12:31 remaining.

Cincinnati extended the lead to 31-20 with 7:29 left after Burrow’s 10-yard touchdown to Boyd.

But the Jets scored 14 points in less than a minute to take the late lead. White found Ty Johnson for a 19-yard touchdown — the 2-point conversion failed — with 4:36 left.

Then Lawson picked off Burrow and the Jets quickly followed up with the go-ahead score.

The Jets throttled the Bengals’ offense for most of the first half, but still trailed 17-14 at the break. New York opened the game with a sharp scoring drive, and took a 7-0 lead on Carter’s 8-yard run. It was the first points in the first quarter all season for the Jets.

But three first-half turnovers led to 10 Cincinnati points and the lost lead. Germaine Pratt’s interception set up Mixon’s 1-yard TD run to tie it 7-7 on the first play of the second quarter.

The Bengals took a 14-7 lead when Burrow flipped a 2-yard touchdown to rookie WR Ja’Marr Chase. After Vonn Bell’s fumble recovery stopped another Jets’ drive, Evan McPherson hit a 21-yard field goal for a 17-7 lead with 1:54 left in the half.

New York, which outgained Cincinnati 261-119 in the first half, pulled to within 17-14 with 19 seconds left after White found Braxton Berrios with an 8-yard scoring pass.