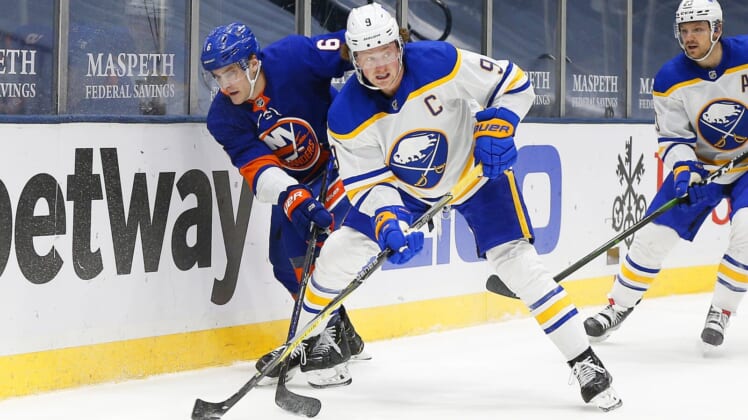 This concludes the Jack Eichel saga in Buffalo where he hasn’t played since early in the 2020-21 NHL season. Eichel has been injured ever since then and was unable to agree with the Sabres on which surgery would be most beneficial for him. Now that he has landed with the Golden Knights, the expectation is that they will allow him to receive the surgery he wants.

Eichel was the second overall selection in the 2015 NHL Draft and is one of the best players in the league when healthy. He had a personal best 82 points in 77 games during the 2018-19 season and has a career total of 139 goals over 375 games.

Eichel gives the Golden Knights a legitimate first-line center for the first time in franchise history. It remains to be seen how exactly head coach Peter DeBoer will arrange his lineup but he has numerous options. One of the most intriguing is to roll out the first line of Mark Stone, Eichel, and Max Pacioretty which would be among the most dangerous in the league when healthy.

Jack Eichel is also in the fourth year of an 8-year $80 million contract. He instantly becomes the most expensive contract on the Golden Knights and will likely be so until the end of his deal. The Golden Knights are going to need to pull off some salary cap gymnastics to fit everyone under the cap once their players return from long-term injury reserve.

Saying Goodbye to Krebs and Tuch

Besides the two draft picks, the Golden Knights also had to part ways with Peyton Krebs and Alex Tuch in this deal. Both are good young players with the potential to continue to improve in this league. Krebs especially has been looked at as a key part of the Golden Knights future, as well as an important cost-controlled asset right now.

Tuch’s combination of size and speed makes him a devastating middle-six winger that can put the puck in the back of the net. Tuch is currently missing time due to a shoulder surgery that he had before the season began. He will instantly be one of the Sabres’ best players.

The price for Jack Eichel was never going to be cheap and the Golden Knights now believe they have the forward they need to take a step toward winning a Stanley Cup.