Frankie Montas to the New York Mets, how a trade might work 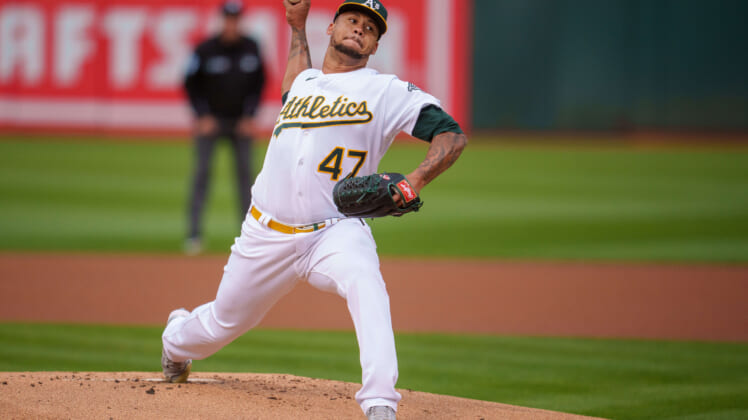 The New York Mets rotation will be without Max Scherzer and Jacob deGrom until July, at the earliest. In an NL East race that should get more interesting this summer, New York might need a Frankie Montas trade to stabilize its pitching staff.

New York simply can’t depend on Scherzer and deGrom remaining healthy. Arm troubles are becoming a persisting issue for New York’s ace and Scherzer is dealing with an injury that has a high risk of setbacks. Timely hitting and rotation depth can only be maintained for so long, the Mets should make a move.

New York is already scouting Montas, per Jon Heyman of the NY Post and that’s another indication they are in the market for front-line pitching.

Keeping that in mind, let’s examine what a Frankie Montas trade might cost the Mets and how he would impact this club.

Projecting a Frankie Montas trade to the New York Mets

Oakland is willing and ready to trade Montas if the right offer comes along. While the front office is placing a premium value on him, it knows this is the time to move him. If the Athletics wait another year, any potential return would be diminished because he becomes a one-year rental.

Money won’t play a factor in negotiations for the Mets. Montas is only owed $5.025 million this year and he is arbitration-eligible in 2023. Of course, acquiring a top pitcher with 1.5 seasons of control will come at a cost to New York’s farm system.

Baty is the centerpiece of the deal. Rated as a top-50 prospect and the No. 2 player in New York’s farm system, trading him is a blow. However, Mark Vientos is another third base prospect who could allow Baty to become expendable in the right deal. Adding a pitcher like Montas checks that box.

Dominic Smith provides the Athletics with an MLB bat to plug into their lineup and he’s still under team control for multiple seasons. Meanwhile, Calvin Ziegler could be a future starter in the A’s rotation if he develops.

While this cost might seem high to some, it comes in at a 37-35.4 advantage in New York’s favor in the trade calculator from baseballtradevalues.com. The A’s receive the premium prospect and minor-league depth they seek, while New York keeps Francisco Alvarez and lands a No. 2 starter.

There is no telling precisely when deGrom or Scherzer will rejoin the Mets’ rotation. As for Tylor Megill, he is still working his way back from right biceps tendinitis. Even if he returns within a few weeks, Carlos Carrasco and Taijuan Walker are massive durability risks.

New York needs to find stability, someone who can help push Trevor Williams and David Peterson out of the rotation. Creating a back-to-back of Montas and Bassitt would prove ideal for manager Buck Showalter this summer.

He dominated after the All-Star Break in 2021, posting the sixth-best strikeout rate (29.7%) and the third-best Swinging Strike rate (15.4%). Things aren’t looking much different this season. Across 57.2 innings, Montas is striking out nearly 29% of batters faced with a 14.1% SwStr rate.

According to Pitcher List, opponents are posting a .108 batting average against Montas’ splitter, .208 off his four-seam fastball and .154 against his slider. After flashing ace-caliber stuff for several years, it’s starting to all come together.

Montas would become New York’s No. 1 starter until its aces return. When they are in the dugout, he can learn from two future Hall of Famers and potentially take another step forward as a pitcher. When the MLB playoffs roll around, the Mets can run out a postseason rotation with deGrom, Scherzer, Montas and Bassitt.