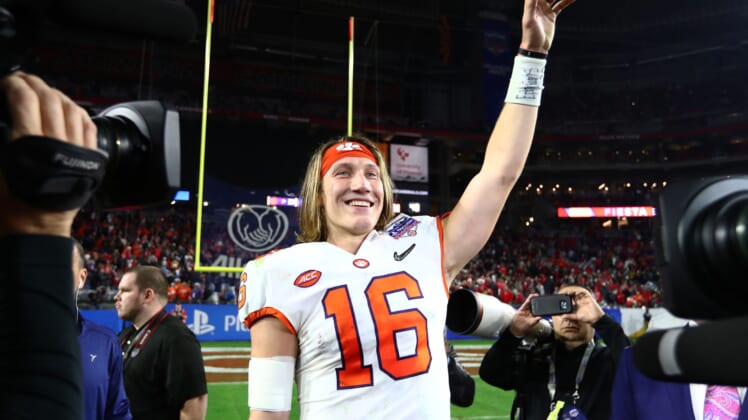 The Clemson Tigers beat out countless top programs in 2018 to land a generational quarterback prospect. Now, two years after college teams sold out for him, several NFL teams might need to consider tanking for Trevor Lawrence in 2020.

The No. 1 overall recruit in the 2018 recruiting class, per 247 Sports, Lawrence arrived at Clemson and quickly worked his way up the depth chart. He made his first start as a 19-year-old for the No. 5 Tigers on Sept. 29, replacing Kelly Bryant in a matter of weeks.

Even in his freshman season, Lawrence showed everyone that his arm talent is exceptional. It started early in the year with jaw-dropping throws and continued in the CFP Semifinal with more touchdown dimes.

When the Tigers took the field against No. 1 Alabama in the CFP National Championship, Lawrence took the field with many expecting him to struggle under the pressure. Instead, the freshman delivered unbelievable strikes with defenders in his face, won a championship as a true freshman and finished the year with 3.280 passing yards and 31 total touchdowns.

Lawrence’s name exploded among NFL fans and analysts, with everyone imagining his future as the No. 1 overall pick in the 2021 NFL Draft. Even though he was two years away from becoming draft eligible, the long-haired quarterback had everyone dreaming about his future.

It’s hard to blame people for their excitement. The same traits that helped Joe Burrow win the Heisman Trophy this season and will likely make him the No. 1 pick in 2020, are evident in Lawrence’s game.

All of those same traits are already on display when you watch Lawrence. While he might have struggled early in the ’19 season with five interceptions in his first three games, he consistently flashed the traits NFL teams can only find in an elite quarterback.

Lawrence averaged 8.5 yards per attempt with a 7-3 TD-INT ratio in September and completed only 62.8% of his pass attempts. Dabo Swinney defended his star quarterback and blasted the media for trying to generate false narratives.

Sure enough, the sophomore turned things around and played at an elite level. Lawrence finished October with a 9-3 TD-INT ratio then threw 22 touchdowns and zero interceptions in his final eight games.

Lawrence’s numbers through his first two seasons are outstanding. He’ll enter his junior season with 6,945 passing yards, a 66-12 TD-INT ratio and a 65.5% completion rate. He also made strides as a runner in 2019, finishing with 563 rushing yards and nine touchdowns.

The numbers are staggering. Lawrence’s tools as a passer are even better. Oh, he’s only going to get even better this offseason. He is the favorite to win the Heisman Trophy next season and Clemson is favored to win the national title.

Lawrence’s numbers, championship track record and skills make him the total package that an NFL front office looks for. That’s why these five NFL teams must consider tanking for Trevor Lawrence in 2020.

We know Jon Gruden is a competitor and throwing away their first season in Las Vegas might hurt the Raiders. However, the chance to be in a position to land a quarterback of Lawrence’s caliber more than justifies the cost. The Raiders finished 7-9 this season with a quarterback that often hindered their offense. Just imagine what this team could do with a great quarterback.

Pulling this off requires the Raiders to take a step back in 2020. As a result, a team with $60 million in cap space would need to be less aggressive this offseason and the Raiders must start Derek Carr for another season.

If the Raiders can tank properly in the upcoming season, they would be in the perfect position to leap forward in 2021. Las Vegas could draft Lawrence, cut Carr to create $19 million in cap space and have $100 million to spend in free agency to surround Lawrence with more talent.

Tanking becomes even more attractive for the Panthers following Luke Kuechly’s retirement. The defense will be hurting without its leader. Meanwhile, Cam Newton is returning from ankle surgery and could be traded. Matt Rhule has a seven-year contract and he knows how to rebuild a program, so he should do it here.

Carolina could trade Cam Newton for draft picks in 2021, putting them in a position similar to the Miami Dolphins. The additional draft picks would allow Carolina to potentially trade up in 2021 to make sure it can secure Lawrence. Rhule can focus his efforts on building the offensive line this offseason and building the foundation of his program.

After tanking in 2020, Rhule can land a franchise quarterback that will execute offensive coordinator Joe Brady’s scheme to perfection. The Panthers are clearly in it for the long haul and tanking for Trevor Lawrence is the right move.

It might seem early for Washington to give up on Dwayne Haskins, especially since he improved near the end of the season. However, the Arizona Cardinals proved that previously spending a first-round pick on a quarterback shouldn’t stop you from grabbing an upgrade.

Haskins might become a good quarterback in the NFL, but his ceiling and talent level isn’t remotely close to Lawrence. Washington is stuck with one of the worst rosters in football and it might get even worse this offseason if Brandon Scherff leave. It really might not take very much for the Redskins to finish near the bottom of the standings, either.

If Washington winds up with the worst record next season, it’s a reflection on Haskins’ poor play. So, if this team lands the No. 1 pick in the 2021 NFL Draft, it must take Lawrence.

The Chargers are in trouble. While the team’s struggles in 2019 are problematic, the inability to attract any fans in Los Angeles is of far greater concern. If the Chargers wants that to change as they move into a new stadium, tanking for Trevor Lawrence is the best option.

Los Angeles can start its transition year by letting Philip Rivers, Melvin Gordon and Hunter Henry walk in free agency. The Chargers can rely on a backfield of Austin Ekeler and Justin Jackson to carry the offense. While the 2020 season might be ugly with Tyrod Taylor at quarterback, it’s not like there are fans going to watch the Chargers anyways.

The right moves can put this team in a position to land the No. 1 pick next year. Lawrence’s personality and hair are perfect for Los Angeles, while his talent would ignite the fan base and make the Chargers the new favorite team in the city.

Mitch Trubisky is not the answer. Chicago will let him open the season as its starter, but the front office must know he isn’t the long-term answer. If the Bears want to win a Super Bowl again, then the best path is by tanking in 2020.

Another underwhelming season would be tough for the fan base to take, especially if it means two losses to the Green Bay Packers. However, Chicago must think about its window beyond 2020 and the chance to land their own star quarterback.

Would Chicago’s fans rather see the team compete for a .500 record next season and beat Green Bay once or potentially land their own Aaron Rodgers? The answer is easy. The Bears need to tank for Trevor Lawrence in 2020.