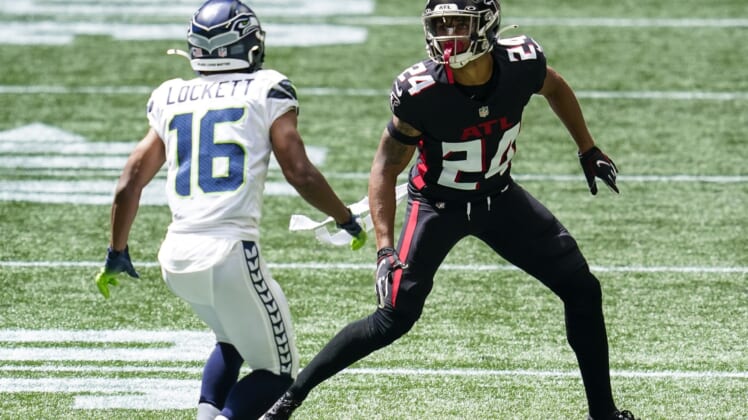 Atlanta Falcons cornerback A.J. Terrell is landing on the reserve/COVID-19 list, making him the first NFL player to miss a game this season due to the coronavirus.

Terrell, the No. 16 overall pick in the 2020 NFL Draft, will miss Week 3 against the Chicago Bears. Now, NFL’s COVID-19 safety protocols will be put to the test in a big way.

Since NFL teams reported for training camp, the league has been riding a wave of momentum with its system working just as the league imagined. While a fan who attended the NFL Kickoff Game tested positive for COVID-19, the NFL hasn’t had a single player miss a game until now.

According to ESPN’s Adam Schefter, the Falcons received the positive results after Terrell received a test on Friday. Because of the 24-hour delay, with the rookie cornerback not showing symptoms of the coronavirus, he practiced with the team.

The NFL has implemented numerous protocols to protect its players and coaches better. Among them, all personnel wear devices that trace where they go and who they come in contact with. Thanks to that technology, the Falcons can limit their contact tracing so specific players and coaches.

As of now, the team hasn’t reported any other positive test results. However, Atlanta’s secondary was already depleted coming into Week 3 with safety Ricardo Allen and defensive back Kendall Sheffield ruled out with injuries.

The Falcons should receive team-wide COVID-19 test results, thanks to the NFL’s commitment to daily testing, before Sunday’s game. If more players test positive, the team has a 16-man practice squad it can use to fill out part of the roster.