Denver Nuggets center Nikola Jokic was suspended one game without pay by the NBA on Tuesday and the Miami Heat’s Markieff Morris was fined $50,000 for an altercation in Monday’s game between the players.

With 2:39 remaining in a game the Nuggets appeared to have in hand while up 111-94, Morris collided hard with Jokic near midcourt. Jokic reacted by shoving Morris to the ground, with both players ejected in the Nuggets’ eventual 113-96 victory.

The Heat’s Jimmy Butler was fined $30,000 for “attempting to escalate the altercation,” and he also failed to comply to a requested interview of the incident by NBA security. Butler appeared to gesture toward the Nuggets’ bench, suggesting the confrontation move out of sight of fans in the arena.

Jokic will serve his suspension in Wednesday’s home game against the Indiana Pacers. 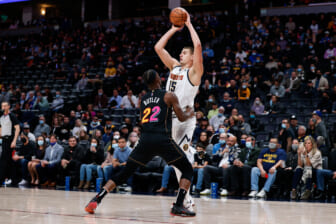 Jokic’s first triple-double of the season (25 points, 15 rebounds, 10 assists) was overshadowed by his ejection. He was remorseful an hour after the game.