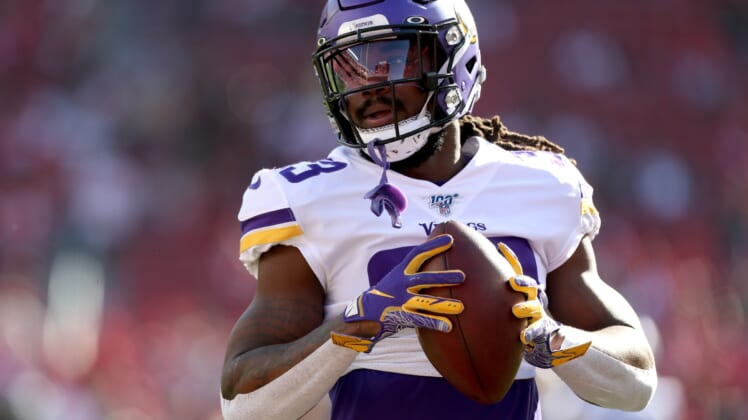 Minnesota Vikings running back Dalvin Cook became the latest star running back to hold out from training camp in search of a contract extension. If the Vikings want their star to return to the field, they’ll reportedly need to open up the wallet in a big way.

The opportunity to cash in became apparent after seeing Christian McCaffrey sign a record-breaking extension worth $16 million annually. . Dalvin Cook’s stats this past season, 1,654 scrimmage yards and 13 rushing touchdowns, already prove what he is capable of. Now, as he prepares for a 2020 NFL season when the Vikings will reportedly rely on him even more, per The Athletic’s Chad Graff, Cook is setting a high bar for his contract extension.

According to ESPN’s Courtney Cornin, the 2019 Pro Bowl selection originally wanted to match McCaffrey’s deal at $16 million per season. Meanwhile, per ESPN, Minnesota came in with an initial offer under $10 million annually.

Cook has reportedly lowered his asking price to $15 million, but the gap between the two sides is significant. Currently, McCaffrey ($16 million), Ezekiel Elliott ($15 million), Le’Veon Bell ($13.1 million), David Johnson ($13 million) and Derrick Henry ($10.27 million) are the only running backs making $10-plus million annually.

Minnesota will certainly need to increase its offer significantly if it wants to keep Cook, especially since he could test free agency next offseason. However, Cook’s injury history is a significant concern for a team considering a long-term investment in a running back.

If Cook is willing to sit out into the regular season, it would open the door for Alexander Mattison to take over. A third-round pick in the 2019 NFL Draft, Mattison averaged 4.6 yards per carry in his rookie season and looks like a future starter.