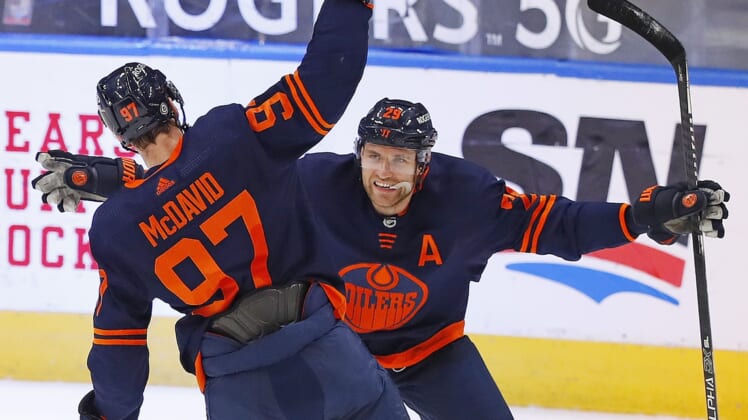 May 8, 2021; Edmonton, Alberta, CAN; Edmonton Oilers forward Connor McDavid (97) celebrates his 100th point of the season on a goal by forward Leon Draisaitl (29) against the Vancouver Canucks at Rogers Place. Mandatory Credit: Perry Nelson-USA TODAY Sports

McDavid, who three times before finished a season with at least 100 points, began the night with 96. He needed just two periods to record four points (one goal, three assists) against the Vancouver Canucks to become the first player in 25 years, and ninth in league history, to collect 100 or more points in his first 53 games of the season.

Mario Lemieux and Jaromir Jagr of the Pittsburgh Penguins reached that feat in the 1995-96 campaign.

McDavid went into the third period of Saturday’s game 32 goals and 68 assists, and a 21-point lead on teammate Leon Draisaitl in the league’s scoring race. Draisaitl scored two goals in the second period, with McDavid assisting on both, and was at 79 points.

McDavid has scored at least two points in five straight games and in 10 of his past 11 outings, collecting 31 points in his past 11 games (with the third period still to go Saturday).