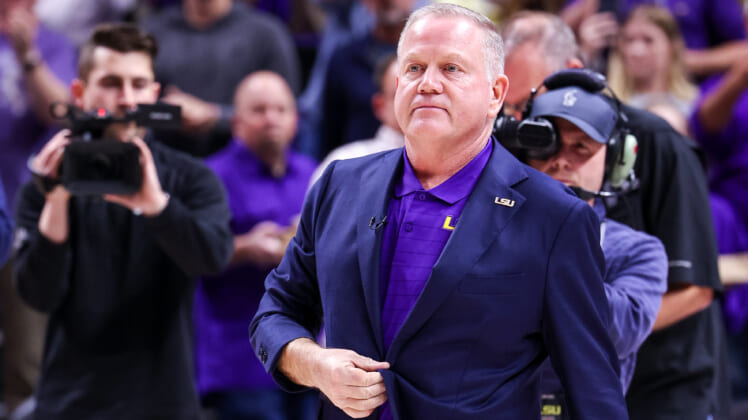 The 2021-’22 college football coaching carousel delivered a new wave of record-setting contracts that resulted in a shakeup among the highest-paid NCAA coaches. Coming off a year when so many schools were devastated financially by the COVID-19 pandemic, Congress is now investigating the matter.

Even before Georgia Bulldogs coach Kirby Smart receives an extension, an unprecedented amount of money is being handed out by top universities across the country. The USC Trojans lured Lincoln Riley away with a contract believed to be worth $10-plus million annually, the LSU Tigers pulled Brian Kelly away from Notre Dame on a deal worth $9.5 million per season and Mel Tucker’s instant success at Michigan State resulted in a 10-year extension worth $95 million.

All of this is happening after universities were dealt massive financial blows because of the COVID-19 pandemic. The economic loss is greatly hurting America’s Olympic pipeline, as detailed by LX’s Noah Pransky. It led to devastating cuts, per ESPN, with 63 tennis programs, 36 basketball teams, 30 soccer programs, 29 cross country teams and 17 swimming & diving programs cut from universities in 2020, per ESPN.

The increase in spending on college football coaching staffs also includes dead money, paid out due to buyouts of fired assistants and head coaches. ESPN’s Paula Lavigna and Mark Schlabach reported in November 2021 that FBS schools spent more than $530 million in dead money over the last decade-plus.

With many universities benefiting from tax-exemption status and seemingly finding more ways to pay both college football coaches and fired football staff, the House Ways and Means Subcommittee on Oversight is taking notice.

Congressman Bill Pascrell Jr. (D-NJ-09), the chairman of the committee, released a press release on Friday announcing that multiple universities are under scrutiny and are the subject of an ongoing investigation.

“This week on national signing day, thousands of young students agreed to play sports for free for university programs paying literally tens of millions of dollars a year and giving free houses to their coaches. These exorbitant contracts to sports coaches from schools that receive federal tax-exempt status demand answers for the taxpayers that help fund these institutions. My letters today are beginning the work of seeking those answers and our subcommittee will remain focused on this issue and further possible abuses of the tax code by schools enjoying tax-exempt status giving exorbitant contracts to athletic coaches.”

Pascrell, who served in the United States Army (1958-’67) is particularly concerned by the amount of compensation coaches are receiving at a time when student-athletes remain unpaid by their universities and the NCAA. Furthermore, Pascrell wants answers from the schools that receive the federal tax-exempt status and that attempted to cut various Division 1 programs after the pandemic.

“These contracts also present a stark contrast to the benefits received by the university’s student-athletes, whose grants-in-aid each semester pale in comparison to their coaches’ compensation. Student-athletes make an enormous commitment of time and effort as team members, but it is the coaches that are profiting handsomely from their labor.”

Letters were sent to USC President Carol Folt and LSU President William Tate IV. The committee is also focusing on Stanford and Michigan State, programs with two of the most well-compensated coaches in college football.

Stanford, a 27-time winner of the NACDA DIrectors’ Cup awarded for overall excellence across a school’s entire athletics program, planned to cut 11 varsity teams in July 2020 to create ‘fiscal stability‘ before reversing course after scrutiny. However, many D1 programs followed through on cuts.

While it will take months for this probe to conclude, the impact of it could have an important influence on the future of college football.