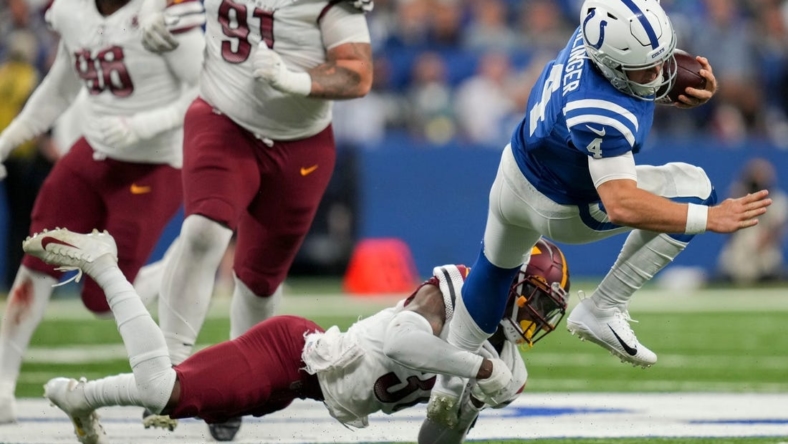 Taylor Heinicke’s 1-yard run with 26 seconds left capped a nine-play, 89-yard drive as the Washington Commanders roared back from a late nine-point deficit to stun the host Indianapolis Colts 17-16 on Sunday.

Heinicke, in his second game since replacing injured quarterback Carson Wentz, went 23 of 31 passing for 279 yards with one touchdown and one interception. His 33-yard strike to Terry McLaurin to the Colts’ 1-yard line set the stage for the winning score.

McLaurin racked up 113 yards on six catches, and Antonio Gibson finished with 77 yards from scrimmage, including a 9-yard touchdown reception in the second quarter.

Indianapolis quarterback Sam Ehlinger, who was making his first career start and his season debut, completed 17 of 23 passes for 201 yards with no touchdowns or interceptions.

Jonathan Taylor finished with 16 carries for 76 yards, including a season-best 27-yard burst, and Alec Pierce made three catches for 65 yards for the Colts (3-4-1).

Indianapolis lost two fumbles in the red zone but still built a 16-7 lead with 11:12 left in the game on Nyheim Hines’ 6-yard touchdown run, his first score of the season.

The Colts came up a yard short on third-and-5 and had to punt on the next drive, setting up Washington’s last chance. Aside from the red zone turnovers, Indianapolis also had to settle for three field goals from Chase McLaughlin — from 46, 39 and 20 yards.

After the 20-yard kick, which gave the Colts a 9-7 lead, they were able to strike again quickly.

Shaquille Leonard intercepted a pass by Heinicke and returned it 15 yards to the Washington 24-yard line. Two plays later, a defensive pass interference penalty gave Indianapolis the ball on the 6, and Hines scooted around left end for the 16-7 lead.

The Commanders finished with 362 yards to 324 for the Colts.

Colts defensive tackle Tyquan Lewis was carted off the field in the closing minutes with an apparent knee injury.