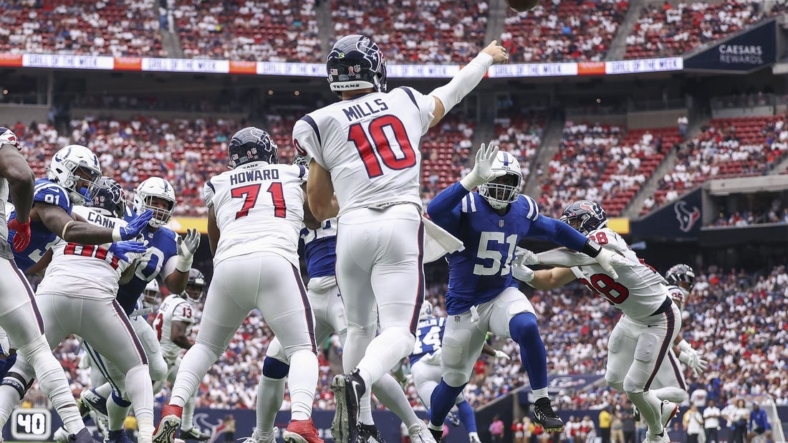 Rodrigo Blakenship pushed a 42-yard field goal attempt wide right with 1:57 remaining in overtime and the Indianapolis Colts failed to complete a second-half rally and settled for a 20-20 season-opening tie with the Houston Texans on Sunday at NRG Stadium.

In his first game with the team, Colts quarterback Matt Ryan passed for 352 yards while becoming the eighth quarterback to surpass 60,000 career passing yards. Jonathan Taylor rushed for 161 yards on 31 carries to help the Colts erase a 17-point, second-half deficit.

Davis Mills passed for 240 yards and two touchdowns for the Texans, whose offense stalled in the fourth quarter and overtime. Houston totaled 299 yards compared to the Colts’ 517 yards.

The Colts mounted their comeback early in the fourth quarter, surging into the red zone before the Texans turned consecutive pass breakups from Desmond King II, Jonathan Owens and rookie Derek Stingley Jr. into a Blakenship 27-yard field goal that cut the deficit to 20-6.

On the ensuing possession, Colts linebacker E.J. Speed delivered a blindside hit on Mills that jarred the ball free. DeForest Buckner recovered for Indianapolis at the Houston 20 and the Colts needed four plays to pull within even on Taylor’s 2-yard run with 7:42 remaining.

A seven-play, 80-yard drive featuring Taylor before Ryan hit Michael Pittman Jr. for a 15-yard scoring pass knotted the score at 20-20 with 1:54 left in regulation.

The Colts appeared primed to recapture the lead before Ryan’s screen pass to Taylor was tipped and picked off by Jerry Hughes at the Houston 29. Four plays later, Mills converted the first of his two scoring passes to tight end O.J. Howard, a 16-yarder that gave the Texans a 10-3 lead with 2:37 left in the half.

After Texans linebacker Christian Kirksey recovered a Ryan fumble near midfield, Mills and Howard connected for 22 yards and a score that enabled the Texans to secure a 20-3 lead with 7:16 left in the third.

Pittman Jr. had nine receptions for 121 yards for the Colts. Brandin Cooks led the Texans with seven catches for 82 yards.