Eight Cinderella teams most likely to make the Final Four

If you haven’t heard, it’s March. The NCAA Tournament starts next week, with the bracket being announced Sunday. But we thought it’d be good to get a head start.

By the nature of the Tournament, it’s inevitable that a couple teams will do the unexpected, pull off a couple upsets and find themselves in the Sweet 16. There’s no more reliable bet in sports than that, yet there’s no tougher one than putting a finger on exactly which that team will be. College basketball is weird and random — that’s what makes it so great.

Before we look at this year’s potential Cinderella teams, let’s be clear about what a Cinderella team is. Nobody seeded higher than sixth can be a Cinderella team. If it’s a blue blood program, that number gets bumped up to 10. Because the bracket itself isn’t out yet, we’re using Bracket Matrix’s projection as of Saturday night for these parameters. Let’s get right into it.

The Bruins have more firepower than their record would have you believe. Aaron Holiday is one of the country’s best scorers at point guard, averaging just over 20 points per game with nearly six assists to boot. He’s a legit star — Steve Alford can call his number in a big moment and feel confident. Thomas Welsh is one of the better offensive stretch 5’s out there, shooting over 40 percent from deep. Kris Wilkes and Jaylen Hands are both competent scorers from the wings, though their efficiency leaves something to be desired.

The Bruins’ two problems are depth and defense. The first will lessen by the nature of postseason basketball: rotations get shorter in must-win games, though Alford will still need more from his bench than he’s gotten. The defense, well, that’s tougher to get around. UCLA is capable of pulling off upsets though. It has the ingredients — Holiday surrounded by a talented offensive group might be enough to string together a few wins.

It’s worth being skeptical of the Tigers, but it’s also imperative to acknowledge they’re coming into the Tournament as one of the biggest question marks in the field.

Michael Porter’s return in the SEC Tournament was, well, let’s be nice and call it underwhelming. He scored 12 points on 5-of-17 shooting as Mizzou put up less than a point per possession in an upset loss. Given that it was Porter’s first game action since November 10, it’s worth forgiving. Porter was still one of the highest-touted recruits in his class. He’ll still be an NBA lottery pick and he’ll probably still be an NBA star. It might be too much to ask him to lead the charge in a Tournament run, but nobody doubts Porter is capable of doing so.

The Tigers were a top-40 team this year, per KenPom, and that was without Porter. If he’s playing at his peak, Missouri has a run in it. 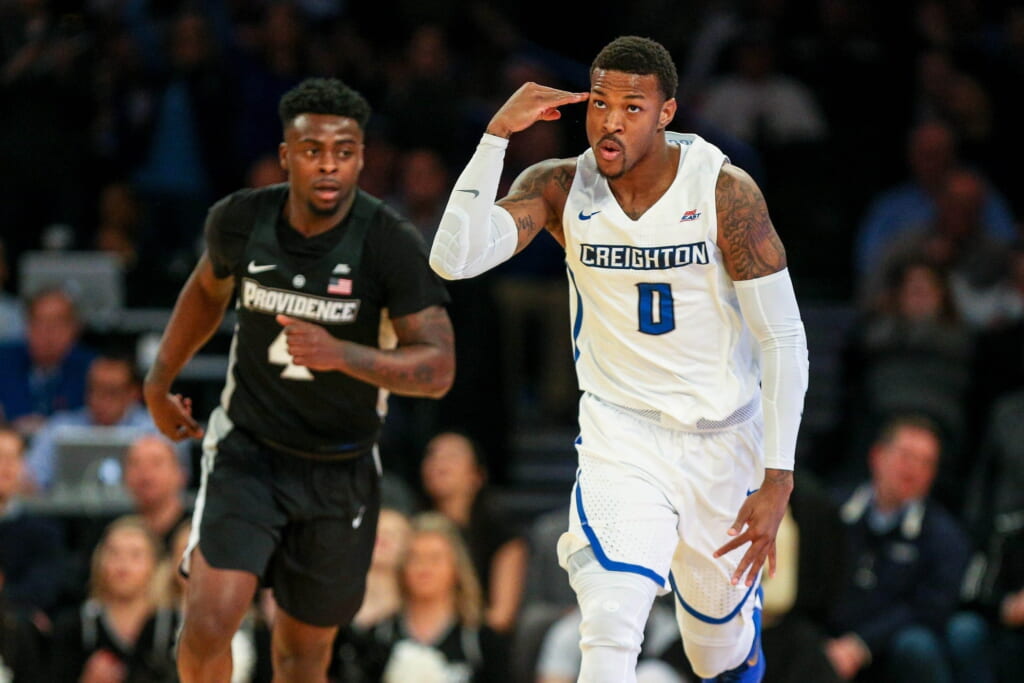 The Bluejays lost their last two games, along with four of their last six, coming into Selection Sunday. This is a team that looks like it peaked over the first half of the season — Creighton lost just three games before mid-January, then dropped eight since. But because we’re in the realm of possibility and not likelihood, it’s worth including the Bluejays here.

Creighton’s offense is top-25 in the country and its effective field goal percentage is in the top-10, per KenPom. Marcus Foster is the type of dynamic scorer you need to put together a Cinderella run — he averages over 20 per game on a 58.7 effective field goal percentage. Khyri Thomas is ruthlessly efficient and the Bluejays rarely turn it over as a team. If they can find their early-season grove, a run isn’t out of the question.

The Wolfpack threw everyone off the scent with a horrendous showing in the Mountain West Tournament. They barely got by UNLV in their first game before falling by 17 to San Diego State in their second. Don’t let that bother you when it comes time to fill out a bracket.

Nevada is good. Really good. The Wolfpack are 24th in adjusted efficiency and top-10 in adjusted offensive efficiency. They shoot like gangbusters from 3 and don’t turn the ball over. Caleb Martin is a star. Recent results will push Nevada down the s-curve — it’s projected to be an eight-seed as of this writing. The Wolfpack are as capable of beating a top seed in the second round as anybody. Don’t bet against them.

Some of Providence’s underdog-ness will be gone after the Big East Tournament final, in which the Friars pushed Villanova to the limit before losing in overtime. But not all.

The Friars’ defense is for real. KenPom rates it as 35th in the country by adjusted defensive efficiency, but in its last five games, Providence has played defense at a top-five level. Offense is still an issue — Rodney Bullock is inefficient, Kyron Cartwright is inconsistent — but when it clicks, it clicks good. The Friars knocked off Xavier, a possible top seed, and nearly beat Villanova on consecutive days. Providence can beat anybody — it has proven as much in the last week.

The Bulldogs are slated as a nine-seed in Bracket Matrix’s current projection, despite being ranked 25th in KenPom’s adjusted efficiency. That’s a casualty of the Big East’s depth along with late-season losses, but Butler shouldn’t be underestimated. LaVall Jordan has put together a well-rounded squad without many weaknesses. Unless the Bulldogs run into a team that crashes the offensive glass well, they should have a chance to win just about every game.

Beating a top seed in the second round is a tough ask, but Butler has a win over Villanova this season. The Bulldogs can beat anyone on a neutral court, though the odds will certainly be against them. Their offense isn’t overwhelming, but top-35 is nothing to sneeze at, especially when paired with a top-50 defense. Butler won’t blow anybody away, but it could kill a giant softly. 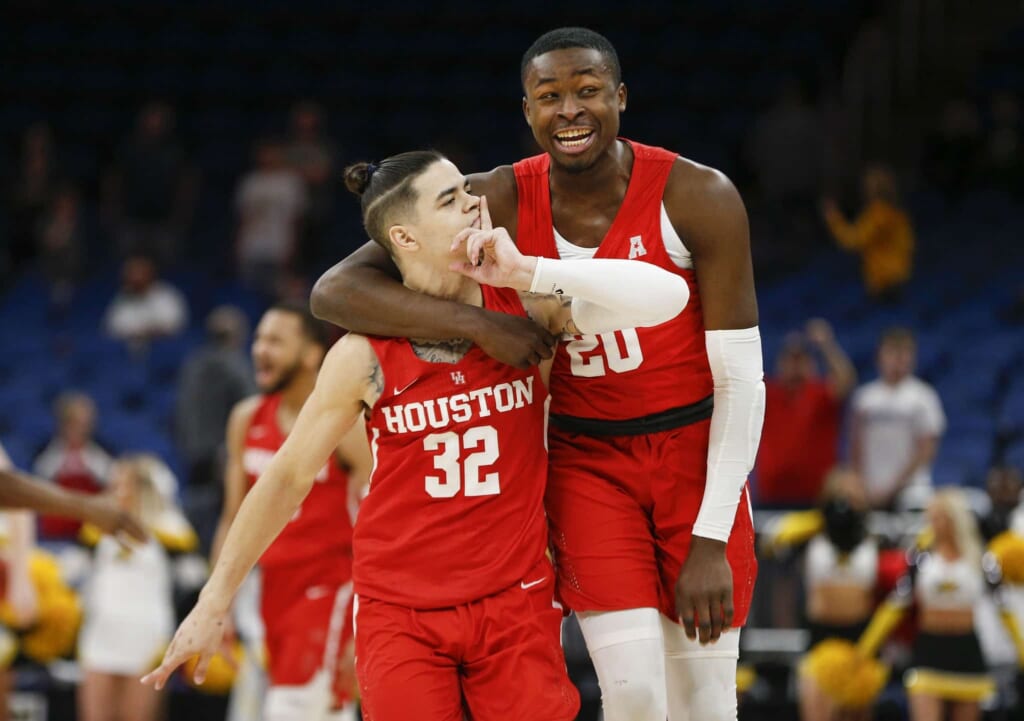 Houston is probably the most borderline team on this list given our criteria. But as of this writing, the Cougars are still projected to be a six-seed. If that’s where Houston end up, don’t be surprised when it upsets someone to get to the Sweet 16.

Rob Gray is a talented scorer, something he put on display in Saturday’s upset win over Wichita State, dropping 33 points on the Shockers. He gets to the line at a high clip, puts up a 57.4 true shooting percentage and has an assist rate nearing 30. Houston’s offense is 28th in adjusted efficiency right now, but their defense has cracked the top-20. They’re a better version of Butler — you can’t beat the Cougars by exploiting some systemic flaw. Oh, and Houston is red-hot. The Cougars lost just once in the month of February, then came to the AAC Tournament and stepped over Wichita State on their way to the final. Be wary of going against Houston in March Madness.

Arkansas bounced out of the SEC Tournament in rough fashion on Saturday — a blowout loss at the hands of Tennessee. The Razorbacks have been hit-or-miss all year, and now is no different. It’s no coincidence that few of their wins have come against top competition, but if you’re looking for a Cinderella story, Arkansas is as good a possibility as anybody.

The Razorbacks’ offense is top-20 in the country by adjusted efficiency, featuring two great scorers in Jaylen Barford and Daryl Macon. Defense is optional in Fayetteville, but Arkansas could certainly string together a couple of wins on Barford and Macon’s back. It upset Auburn just two weeks ago and it could knock off anybody later this week.