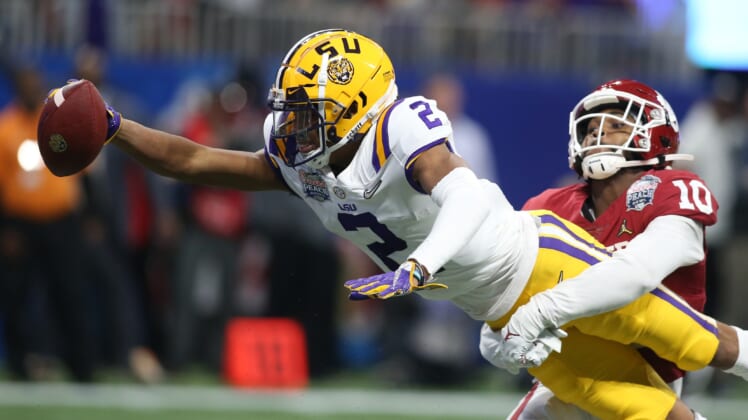 The Oklahoma Sooners came into the CFP Semifinal with a plan to stop LSU Tigers All-American receiver Ja’Marr Chase. It might be time for that plan to change with receiver Justin Jefferson breaking playoff records in a span of 30 minutes.

Heisman Trophy winner Joe Burrow looked to the junior receiver from the jump. He connected with Jefferson on a 19-yard touchdown strike to open the scoring and it clearly set the tone for the rest of the game.

When Oklahoma’s defense kept sending pressure and leaving Jefferson uncovered, Burrow took advantage. He dropped back and found Jefferson again, this time on a 35-yard touchdown strike to give LSU a 21-7 lead before the first quarter even ended.

Trailing by two scores heading into the second quarter, Oklahoma kept sending pressure towards Burrow. He kept showing why he won the Heisman Trophy in a record-setting landslide. Burrow evaded the rush, rolled out to his right and unleashed a perfect 42-yard strike to Jefferson’s outside shoulder for their third scoring connection.

Oh, the Burrow-Jefferson combination didn’t stop either. After Kary Vincent Jr. picked off Sooners quarterback Jalen Hurts on an incredible play, Burrow went right back to Jefferson for the record-breaking score.

As he crossed the end zone for the fourth time in the first half, the college football world couldn’t hold back their incredible reactions to the utter dominance from Jefferson.